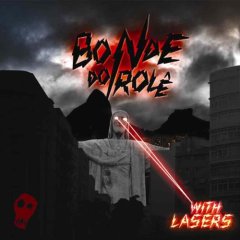 Bonde Do Role’s first full-length album, With Lasers, is not a concept album. If it were, though, it might go something like this:

***A young guy sits on a beach in Brazil. He has a penchant for 80s hard rock, everything from AC/DC and Metallica to Van Halen. He has his guitar plugged into an amp and rocks out on the sand. A guy and a girl are walking along the beach. They come across the dude playing his guitar and begin rapping along to his riffs. Before they know it, they’re playing full-on songs, rocking out as the waves come in and the sun goes down.***

The album begins with an electric guitar and a demonic voice chanting, “Death to Your Speakers” (some of the only English spoken on this album). Like how Michael Jackson combined the creepy voice of Vincent Price and electric guitars on “Thriller,” Bonde (Marina Vello, Pedro D’eyrot, Rodrigo Gorky) combine these elements on “Danca do Zumbi,” before busting in with Brazilian drums and the forceful rapping of frontwoman Vello. Vello sites Courtney Love as an influence, and it’s apparent on With Lasers as she shouts her lyrics with conviction. Although any research I’ve done on Bonde Do Role’s lyrics (sung all in Portuguese) comes up short, it’s rumored they’re saying some very nasty things, such as references to tonguing whore’s assholes.

Although most of the album is sung/rapped in Portuguese, the band slides in some English here and there. They sing only one English phrase “Office boy” in the song of the same title. Apparently the song is about a dude working in an office. English phrases in other songs don’t make much sense at all, such as in “Gasolina” when Vello says, “Meet me after school and I’ll beat you like gorilla.” I’m not sure what this means, and I’m not entirely sure Vello knows what this means either.

What I suspect is producer Diplo had something to do with it. Diplo (M.I.A. producer and boyfriend), sought out to work with Bonde after hearing one of their songs. The best example of Bonde Do Role’s dynamic may be best displayed in the song, “Divine Gosa.” The song begins with Diplo-inspired Brazilian drums, and Gorky’s strange spoken words, before Vello busts in with frenzied raps that get more and more chaotic as the song goes on. The stomp-inducing, clap-along song sounds like how I would imagine Carnaval to sound. Add some guitar to this song and it could quite possibly be Bonde Do Role’s signature tune.

It was rapper Afrika Bambaataa who turned Vello onto hip hop. Prior to Bonde she was singing in a rock band. On “Gasolina” Vello even drops his name several times throughout the song. The track encompasses more hip hop beats, and is not quite as dancy as some of their other songs, but still has the Brazilian feel, including hand drums.

Once “Gasolina” concludes, the album takes a slight slide for the worse. “Geremia” is a silly track using kazoos to carry the melody, and “Quero Te Amar” is completely throw-away, sounding like something that could have been included on Madonna’s last album. The cheesy computer-made beats and electronically altered voice sounds out of place on the album. Thankfully it’s the only song of its type on With Lasers.

Bondallica,” a play on words that combinesBonde and Metallica, works perfectly as the final track on the album, bringing it all back home. Vello gives up on the club-like affected vocals. The beats are simple, and the guitar riffs are hard. If there’s any song on With Lasers that actually shoots lasers, it’s this song.

Final tip for sounding cool to your friends: The band’s name is pronounced “Bon-jah Doh Hol-ay,” and if you hear anyone saying “Bon-day Do Rrro-lay” as if in Spanish, correct ‘em and tell ‘em TIG sent ya.