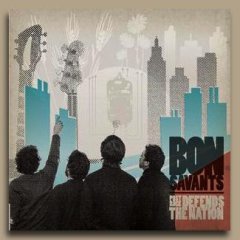 Post Rock Defends the Nation is aural chocolate. Romantic. Addictive. Completely delicious. You know when real good high-quality milk chocolate melts on your tongue and gives you that moment of total pleasure, followed by a need for more? Welcome to the sonic equivalent.

Bon Savants, a Boston five-piece (although at the time of recording they were only four), mix classy and sophisticated sounds with poetic lyrics and scientific undertones — lead singer Thom Moran is a rocket scientist at the Massachusetts Institute of Technology. No, really.

This leads to lyrics that explore the universe in beautiful ways, referencing moons, suns, Schroedinger functions, atom bombs (which never sounded so pretty), and much more, but in the context of human emotion. Moran, who penned most of the lyrics, croons romantically and eloquently, sometimes visiting upper ranges (“Why This Could Never Work Between Us”) and pulling it off dashingly, other times staying in his powerful lower range (“Post Rock Defends the Nation,” where a sort of call-and-response vocal technique is employed). He is backed up by shoegaze-y guitars over pop-rock rhythms. The overall sound is exquisitely subdued, making for a highly sophisticated and classy album. Occasionally a chime or handclap comes along, but the band knows better than to overdo such things, instead choosing to leave them singular, isolated dynamics, which make them all the more fascinating.

The songwriting credits are shared between Moran and the other bandmembers (guitarist/vocalist Kevin Haley, bassist/vocalist Dave Wessel and drummer/percussionist Andrew Dole). Each song has its own sound, its own effectiveness. “Final Grade” is a waltzy number that makes you feel like you’re at the masquerade ball; “91” (written and presumably sung by Haley) is the band’s answer to the Bloc Party explosion; “Everyone” progresses into a raucous feedback-laden guitar and drums swordfight.

Every song is stunning, but perhaps the most stunning of all is the delicate and beautiful ballad “Between the Moon and the Ocean,” undeniably one of the best songs in Boston indie rock of 2006 (the album was released in November). Take the amorously tragic lyrics: “Your kiss was soft and raw, but I felt nothing at all / So I loosened my grip and I watched as you slipped from the waterfall.” Oh Bon Savants, trés trés bon.

At the opposite end of the spectrum musically, though not entirely lyrically, the upbeat “Mass. Ave and Broadway” gives a shout-out to Porter Square (hey! Betsy lives not so far from there!) and is as close to pop as these songs get. Moran sings about drunken longing: “This hand, this bottle are real, but unlike the love that I feel, this bottle won’t go ‘til I’ve sucked it dry / The last drop makes me cry.” Hang on Thom! Betsy’s hopping on the red line to Porter!

“I Am the Atom Bomb” closes the album with a bang (no pun intended), wrapping it all up quite nicely with the final mutterings, “I didn’t have to be / Such a catastrophe” over climaxing guitars.

Go buy this album. Let it swarm around you until it stings. Get the real deal with all the cover art and liner notes, instead of buying it on iTunes, so that you can read along with the poetic lyrics. Feel a charge in your matter like an electrical storm (sings Thom on “Tip of Our Tongues”).
Indeed.

The record is a huge achievement in independent music, prompting befuddlement over why this band has yet to sweep the nation Silversun Pickups-style.