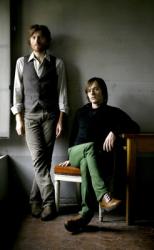 “Not long to go before Air start their first North American tour in three years. Tickets are moving fast so don’t miss out! What to expect? How about a brand new backing band, state of the art light show, Nicolas and JB performing all the classics plus tracks from the highly acclaimed new album, Pocket Symphony.”

So read the bulletin I got from Air’s MySpace page about a week before Monday night’s show at the Pantages Theatre. This bulletin, along with what looked to be an incredible venue, raised my expectations for this show and even caused me to stop bitching that the show was in Tacoma (well, at least not bitch as much as I had been).

I arrived at the Pantages Theatre about halfway through the opening act, Norwegian songstress Kate Havnevik, and I enjoyed her performance. Following her set, I was able to get a good look at the Pantages. It's an impressive venue. Pantages has a very similar feel to the Paramount: same type of architecture, same design elements, a classic turn of the century venue, with one key difference. Pantages is carpeted! I don’t think I’ve ever been to a show in a carpeted venue, and as such I feel it deserves mention here. We’re talking high-quality, soft, well-cushioned carpet under your feet, not disgusting, crusty, might-as-well-not-be-there carpet. Who knew Tacoma was so high class?

Air opened the set with “Venus” from 2004’s Talkie Walkie. J.B. Dunkel’s voice was a little gruff and they just didn’t seem to be in sync as they moved through the track. They ran through a couple of tracks from Pocket Symphony and then began to get into a groove with "Run" and then an awesome rendition of "Cherry Blossom Girl."

Just before they cut into "People in the City," someone in the crowd thanked them for playing Tacoma, which of course prompted someone else to comment “Tacoma sucks!” and I think I heard a “Seattle Rules!” come from somewhere in the back as well. It made for a nice segue into the song. "People in the City" not only set off a wave of Tacoma vs. Seattle mudslinging, but it also was the start of the more expanded light show, which featured a wall — well, more like a curtain — of lights behind the band that flashed and flickered along with the music. I’ve always been a sucker for a light show and I thought the show vastly improved from that point forward.

"Don’t Be Light" was worth the trip down I-5 in and of itself. I had never paid too much attention to this track, but it will forever be on my mandatory Air playlist after witnessing this arrangement. They cranked the tempo up and turned the song into a rave-ready dance track, quite a departure from the studio version. They had managed to get some members of the crowd up and moving at this point and closed the set with "Kelly Watch the Stars" to a standing ovation. The encore featured "Sexy Boy" to the joy of the crowd, and all were ready for more when Air left the stage exuberantly kissing and waving to the crowd with both hands; they are French, after all.