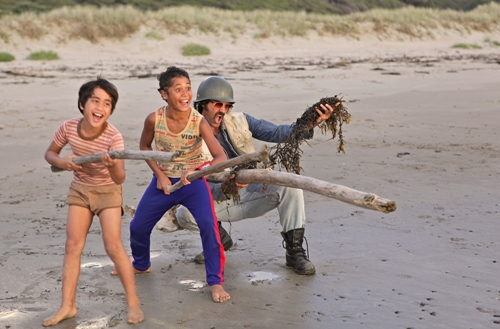 Boy, at the Varsity all week (with live appearances by the director!)

Note: I reviewed this when it played at SIFF last summer, and time has only enhanced my opinion of it. It’s playing a one-week run at the Varsity this week, and director Taika Watiti is appearing in person for tonight’s 7:00 show, and tomorrow at 4:40 & 7:00pm. Go if you can!

Boy is about a boy whom everyone calls Boy. He’s earnest and guileless and prone to fisticuffs, but basically a good kid. He lives with his grandmother, along with his younger brother and a passel of cousins. Grandmother kicks off the movie by leaving for a week or so to attend a funeral in a neighboring town. It turns out that “leaving” means “entirely without any other adult supervision.” Boy is the eldest, or at least the most senior, so he makes everyone dinner, keeps them occupied until bedtime, then helps tuck them into bed.

The movie is delightful for a lot of reasons, and one is that the movie isn’t really about this potentially rather shocking absence of parental oversight, or about the fairly profound poverty they all live in, which seems not to weigh on them any more than it might on, say, a middle-class American kid who never has as much pocket money as he wants to buy candy. The kids entertain themselves contentedly in the derelict cars on their respective properties and hang out at the river or on the beach. Watiti likely knew that the majority of his audience wouldn’t be super familiar with daily life in a Maori town in the mid-eighties, but though you do pick up some cultural context, nothing in the film reads as anthropological curiosity.

In fact, the trouble only starts when a few adults do show up. Boy’s dad, Alamein, has recently exited (been released from?) prison, along with two other ne’er-do-wells who he’s fashioned into a gang of a vintage stripe—closer to the T-Birds than the Crips, with leather jackets and a logo.

Boy’s been longing for his dad’s return and idolizing him freely without any troubling evidence to the contrary, but his dad turns out to be, in most respects, much more of a child than Boy himself, and the movie follows Boy’s dawning understanding of what it means to be an responsible and reliable. An adult, for lack of a better word.

Watiti, the director, also plays Boy’s dad, and he’s a fantastic comedic actor who I’d love to see in something else now. He plays Alamein (who insists on being called "Shogun," even by his children) with neither vanity nor a wink.

Stylistically, Boy is a lot like a Wes Anderson movie, though generally warmer [n.b. I’m not in the camp who considers Anderson’s movies to be soul-less, but Boy is still softer edged]. It’s got animated sidebars and curious characters both open-hearted and quirky. And like much of Anderson’s oeuvre, it’s mostly about what kids need to do when their parents aren’t as grown up as they should be.