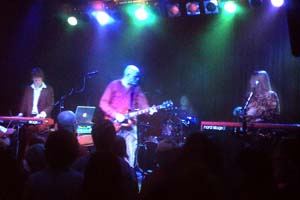 The classic 4AD Records sound has been influential to a million bands in addition to remaining timeless in its unique place in history. The label is perhaps the greatest independent one in existence. Although the record company is still around today, it remains a mere shadow of its former self, a collective that released brilliant record after brilliant record during the 1980s and 1990s. Two noteworthy artists from that era, Brendan Perry (Dead Can Dance) and Robin Guthrie (Cocteau Twins) are currently on tour together and they stopped in Seattle on Wednesday evening for a well attended show that was also part of the Noise for the Needy benefit.

Robin Guthrie opened the show with about an hour of instrumental guitar soundscapes that were a cross between The Cocteau Twins and dreamy soundtrack material. With him onstage, he had a young drummer and bass player to help fill out the layers of sound. For a few pieces, the other two left the stage and Guthrie performed atmospheric melodies on his own, albeit with a generous collection of guitar pedals.

After a short break, Brendan Perry took the stage along with two keyboardists, a bass player and a drummer. Perry is certainly looking older these days, but his voice isn’t showing an ounce of it. His set consisted of songs from his new record, Ark, along with several Dead Can Dance compositions and even a few new tracks. Unfortunately, there were no songs selected from his last solo album, 1999’s beautiful LP, The Eye of the Hunter, which was mostly an acoustic folk album.

The new songs were all electric based with a heavy accent on the drum and bass rhythm section. The sound is unmistakably Perry, but is also a departure from both Dead Can Dance and his previous solo release. They contain more of a dancey, trip hop beat and also feature predominant keyboard currents. “Utopia” is certainly characteristic of this description. There are some classical elements to the composition such as a harpsichord, but most the song structure is rather modern.

During his performance, Perry introduced Robin Guthrie onto the stage and they performed a breathtaking cover of Tim Buckley’s “Song to the Siren” amidst washes of Guthrie’s guitar. This was a terrific selection as the track was recorded in 1984 by The Cocteau Twins on the first This Mortal Coil LP, It’ll End In Tears.

The encore was perhaps the triumph of the evening where two well-chosen Dead Can Dance tracks were performed. The first one, “Severance,” featured a minimal sound with two organ players and a passionate vocal delivery by Perry. The second and final song of the evening was “Spirit,” which was tightly played by the accompanying musicians.

The rumor now is that Dead Can Dance is planning on recording and touring again next year. It looks like we will finally see a follow up to 1996’s Spiritchaser after all.

In Power We Entrust the Love Advocated

Love on the Vine

The Carnival Is Over

A Passage in Time

Song to the Siren (Tim Buckley)