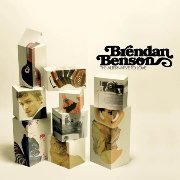 The Alternative to Love

The first few listens to the latest release from Brendan Benson will send you to the bathroom to scrub the toilet, whirl you around the living room playing air drums, set you on the dirty dishes like a meth-head coming into the middle of a tweak. Benson's third release is crystal-clear control freak homemade power pop, the humble luminosity of its production a collaboration with Tchad Blake (Mitchell Froom's engineering Igor who did the same for Crowded House and Elvis Costello a couple decades ago).

Benson played all the instruments on The Alternative to Love and it sounds like it: There is a prissy, claustrophobic oneness to the material, reminiscent of Seattle studio geniuses like Shane Tutmarc or Ken Stringfellow — these are speedy, intricate romantic lamentations full of obsession and intelligence. The first half of the album in particular seems eager to please casual music fan and cult collector alike.

Benson admits to being damaged goods, his boyish looks betraying the fact that he is over thirty and mounting a comeback from a mid-90s attempt at Big Stardom. Lyrics like "Cold hands, warm heart / we just need some time apart," and "You won't get your way as long as you live" are juxtaposed by his messaline vocals, as a perfectly-timed Phil Spector backbeat pushes the hooks and riffs to the front of each song. The surface mod-boy coyness fades and reveals maturity and timelessness in repeated plays.

I didn't love the material until things turned darker with track seven, and the praying-mantis borderline personality disorder imagery of "Biggest Fan." From that point, Benson's depressive nature comes to full bloom deadly nightshade, and his feelings of abandonment and need for vengeance chills in "Gold Into Straw" ("When you used to be my friend / before you turned your back on me … I'm building a box from a tree I grew"). All the casual observations of betrayal and disaffection earlier in the record start to seem much creepier, and although Benson tries to get chipper again on the bouncy "What I'm Looking For," he has already compellingly revealed too much.

Fans of The Alternative to Love, which was made contrary to his woodshedding ways on the quick by orders of a label deadline, might find his performance at the Crocodile Café in Seattle on July 22nd even more startling. He has another project ready to go, this one a collaboration with friend Jack White, and we'll see if this broader, more haunting palette will be represented as much as the chugging sing-a-long nuggets of craft kicking off The Alternative to Love.