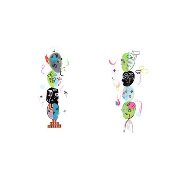 They call them teasers for a reason. Extended plays — something like sides with out-takes attached? When they were twelve inches and on vinyl and not on ready made ironic silver circle wall art scrap, they had a reason-for-existence in the post-New Romantic era, when obese dyed black grooves allowed for the faintest bass note and loudest tom-tom pound to resonate through your down-hall neighbor's floor.

Here's a little compact disc recorded in Montreal, as unsexy as they come, as uninteresting as a few spreadsheets passed between departments. The cover art and the name of the band is useless, begs the thing to be left in the pile. When I first put it in I heard Isaac Brock, producer of half of Wolf Parade's four-song announcement for the upcoming Apologies to the Queen Mary possibly trying to redeem himself for his own success — unnecessary, of course, though a few frat boys cutting in line ahead of you at Trader Joe's drunkenly warbling "Float On" might sometimes strike you otherwise.

It played. "You don't need to do that new wave thing," I found myself saying, making coffee in the kitchen. "We don't all have to pretend like we grew up on early T. Heads." That was 10 AM.

I check the poop sheet: Bandless but Juno-4 owning Spencer Krug was asked to open a show for the Arcade Fire, enlisted his pal Dan to collaborate in his apartment, drumming their demos through computer speakers — which sorta explains the mechanical-man aspect of the rhythm section. They ended up rehearsing only one day before their first show, and that in itself might be a testament to spontaneity. (And why do so many interesting bands have to borrow gear while you never want to hear the guy who works at Guitar World play?)

As I listened the voice stopped being faux nervous. It started to sound like this guy — who is this guy? Dan Boeckner, used to be in something called Atlas Strategic, possibly an Ayn Rand tribute band? — well, it started to sound like he had something to say. The Brock influence is there in the opening gospel-jangle of "Shine A Light," but soon just becomes part of the carving knife robot rock of "You Are A Runner," and the obvious twiddling and shuffle-drums root-squared with Cowboys International and the poppier side of Public Image ("Disco Sheets"), the two chord damnation blues of "Lousy Pictures." This ain't the cheap grace of floating on; this is the importance of "throwing rocks at the sky."

But the something being said has something to do with waiting, with feeling barely alive while life falls all around you, keeping scores no one else knows about, offices full of meaningless busyness, public transportation running on fuel made by ground-up souls, our fossilized essences frozen from the future, a future that will never arrive, so we can't sleep, can't sleep till it's light, the judgment day in the back of our minds, the letter opener they left in us our only weapon.

It's a slice of mock opera that refused to leave my stereo today — and will find its way there often till Sub Pop puts out Apologies to Queen Mary early this fall.