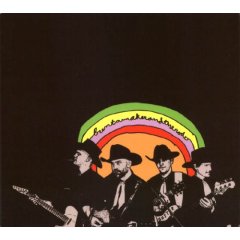 Salvador Santos April 6, 2007 no Comments
I have to admit that this is one of those burning questions which has bothered me since I moved to Seattle: Where are all the men? Sure, there are plenty of underfed, waifish nancy-boys who parade around in their “I’m too emo to wash my hair” ways, but I want to know where the REAL MEN are. Men who will drink you under the table, wrestle a hog, and get a new tattoo – all in the space of an hour. Men who remove beer caps with the same teeth they use to light matches. Men who drive ridiculously tall American trucks and who think global warming means more women in bikinis and BBQ’s year ‘round. Men who think foreplay means buying her another beer.
Just when you thought the Seattle music community couldn’t get any more pussy-fied, in rolls Brent Amaker and the Rodeo on their hogs to save your manhood. These ain’t your unshaven, chaw spittin’, flannel-shirt, dirty jeans type of country bumpkins either: these boys are well-groomed, dressed to the nine’s with matching dry cleaned and wrinkle-free black button-down shirts, crisp and creased black jeans, matching cowboy hats, and neck scarves. Upon first glance of their get-up, you might wonder if they aren’t more suited for The Timberline than The Tractor, but when Brent starts singing lines like “the highlights in your hair are a dead giveaway, you’re not singing country music,” followed by “the rodeo is here to kick your ass,” you know that these boys aren’t light in the loafers.

So what if most of their songs sound like a cover of “Fulsom Prison Blues”? So what if they are all written in the same key? Originality is not the point; it’s beer-swillin’, foot tappin’, shit kickin’ country and western, and it’s an homage what we are so desperately missing around here: a couple of well-slung balls in the horse saddle. And unlike Johnny Cash, these boys leave the churchin’ to the preachers on Sunday and are just out to have a good ol’ whiskey stompin’ time.

Go pick up a copy of their self-titled debut release and expect a record that gets directly to the point; where the average song clocks in just shy of two and a half minutes, and the topics range from gettin’ drunk and getting’ cheated on, to getting your ass kicked and getting’ drunk again. Recorded on a 4-track reel-to-reel in mono, B.A.R. has all the production quality of AM radio. Highlights include “Sissy New Age Cowboy,” which features a generous portion of profanity and serves up one of the best damn spaghetti western guitar riffs I’ve heard recorded.