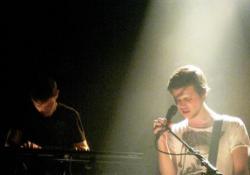 imaginary sher April 10, 2009 no Comments
When artists quickly reach success, like becoming the number one band in the UK with a debut album (White Lies), there's a need to take a step back from the buzz and ask yourself how much of their success is based on industry hype versus talent. It's a chicken and egg sort of scenario really – are they popular because they are successful, or vice versa?  I pondered this as I noticed the highly acclaimed NME Tour selling out shows from New York to Chicago, and wasn't exactly sure what to expect on Tuesday night when they reached Seattle.
Starting off the show at at Neumos was the only American band of the night, The Soft Pack, from San Diego (and formerly called The Muslims). With a laid back, carefree attitude they played an interesting mix of garage band and surfer style pop, reminiscent of The Replacements. The songs were as messy as lead singer Matt Lamkin's hair – though no one seemed to mind. Lamkin's short, repetitive lyrics and shouting-like vocals gave the group a bit of a punk rock feel. Drummer Brian Hill played standing, knocking out fast paced beats on a set of tall cocktail drums. Overall it was an entertaining set, though unlike the style of the bands that followed.
By now the venue is pretty full, and it's obvious the audience is excited to see the next group – White Lies. As the fog machine pumps smoke on stage, the lights go dark and the band walks out. They get right into the first song, "Farewell to the Fairground", and I am immediately relieved by how good they sound. Their music can feel a little flat on the airwaves at times, perhaps a little overproduced, but they put forth a very genuine, spirited rock show. Their big single, "To Lose my Life", is only second on the set list – which is a surprising but welcome choice.
Normally a trio, but with Tommy B on keyboards for the tour, White Lies is drummer Jack Lawrence-Brown, vocalist Harry McVeigh, and bassist and lyricist Charles Cave. They give an impassioned performance with big arena-rock guitar riffs and heavy beats laced with synth. Their sound has drawn comparisons with other  dance-rockers like The Killers, and also, and I believe more accurately so, to Joy Division.
The name  'White Lies' seems fitting for the group as they all (McVeigh in particular) look so young and innocent though play music so brooding and morose; and filled with dark anthems like "let's grow old together / and die at the same time". They wrap up their set with a song titled "Death", an upbeat, memorable number about the fear of dying; and leave me feeling confident that they deserve all the credit for their recent success.
The headliner for the night, Friendly Fires, instantly awakens the crowd with their electro-pop, disco beats, and catchy grooves. Lead singer, Ed Macfarlane, is highly animated and enthusiastic – twisting and shaking his hips like nobody is watching. His falsetto vocals are very likable, and he displays ingenuity with the way he plays with the lyrics. In one of my favorite tracks, 'Jump in the Pool', for example, he shifts the word 'pool' in the chorus phrase "I could tell that you wanted to / jump in my pool / jump in my pool" to sound more like a beat than a word. Also, the cowbell and voice loops used add a nice depth to the songs.
I wish more bands play with as much heart and vigor as these young British bands. Their live shows are definitely not to be missed.