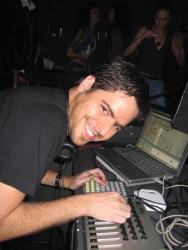 Before a few weeks ago, no one I talked to even knew who Gui Boratto is. However, his show at the Nectar Lounge last night was packed. God bless our wonderful KEXP, but if they hadn't been hyping him all day, having him perform on air in the early evening, there would have been half the number of people there and a whole lot more room to dance my ass off.

Gui's music is dance music for the intellectual. The layers are various, staccoto synths and glittery rushes hovering over crawling ambient backgrounds. There was a lot of anticipation in the air and Gui didn't disappoint. The set was solid and lush from the beginning, the lulls felt lavish and pulled you in, like an ocean undercurrent. He only stopped briefly to smile and to light a cigarette, which was quickly snuffed by Nectar security.

Favorites from his 2007 release Chromophobia (including the fantastic single "Beautiful Life") and some choice new tracks off his '09 album Take My Breath Away were included in Gui's set. Non-album tracks were interspersed for maximum danceable value, and his performance was definitely "clubbier" than his albums, but no less enjoyable. Gui Boratto's music is about the build up and release, the delicate tension in between his rhythms and the satisfactory way he releases them into the next wave of moody bass-lines.

This is feel good music without the quirk, unabashed clean-the-house music that is equally as transcendent while sitting snug with your honey on a beautiful night drive. Austere and soaked in a sweaty sheen, Gui's beats were a perfect catalyst for the energy at Nectar. The body of people moved, arms reaching into the air in prelude to a crescendo letdown that sent the crowd into a skittering mass of limbs.

Live, Gui is a perfect blend of pop and house, deliberately punctuated by upbeat melodies and relying on very simplistic design. But nothing beats putting on some headphones, slapping on some Gui Boratto, and dancing like nobody's watching.