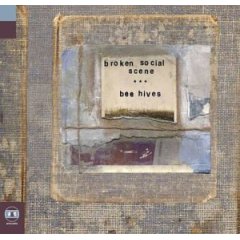 You remember Broken Social Scene, that wondrous indie-rock collective out of Canada whose 2003 release You Forgot it in People was the music-snob's name-drop of November and December? Naturally, when a small label gets a band that can sell records to their niche market like fairies can sell fairy dust to kids at a Peter Pan flight school, then the label gets a surge of happy thoughts and the re-issues and collections of b-sides come soaring in from Neverneverland, and so it is with the band at hand.

Enter Bee Hives, a lovely collection from the folks out at Arts and Crafts. Like its predecessor, it's most definitely a headphones album. However, while the ambience of YFIP is sort of there, and the enigmatic nature is still sort of there, for eight of the nine tracks, the record feels like, well, just a bunch of b-sides.

The album opens with an intro dubiously entitled, "intro." It sounds exactly how you think it might – some distortion, a lot of reverb, and then it's over. That's followed by "Marketfresh," a very decent song in all aspects, and probably got the boot from YFIP's track list in favor of the slightly better "Looks just like the sun." They both have the cool and elaborate acoustic-ness with electronic beeps and blips in the background perfect for collapsing on a couch at four in the morning.

The following instrumental, "Weddings," might have been more aptly titled "Escalator" or "Moving Sidewalk at the Airport When you're really Tired." If you're awake enough to pay attention to what's going on in all the Broken Social Layers, then you'll find it's as much an enjoyable track as the first half of "Da Da Dada," another cut on Beehives taken from the "Cause = Time" 7", but one which about two minutes into the unimpressive instrumental layers at the beginning, opens up with a center staged drum kit and some spacey star-gazer laser effects bouncing back and forth behind. It's a little like how you might remember the music waiting in line for Space Mountain.

But what made You Forgot it in People more great then good was that the record flowed seamlessly from track to track. Like a good March Madness bracket, the whole is greater than the sum of the parts, so to speak. Therefore it's not surprising that "Beehives" is best enjoyed with the skip button just beneath your finger.

And that skip button brings us to the crowning achievement of "Beehives," a version of the YFIP track, "Lovers' Spit" that could make Jesus weep. Listening to it for the first time on a trip to D.C., my friend had to pull the car over so that we could hear where it was going. Female vocals and solo piano begin, followed by the lyric "All these people drinking lovers' spit / Sit around and clean their face with it," and then it might as well be a choir of blonde, pink-cheeked baby angels who descend and bless you musically through a song which would justify buying the album twice, just in case one burns down in your house with your whole family trapped inside and you need something to listen to for consolation. Hallelujah.