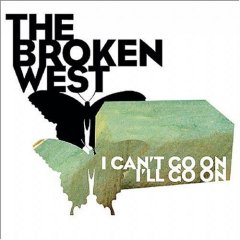 Some albums put a choke hold on you from the first note (see Sleeping in the Aviary). Others pronounce themselves irredeemable quite quickly (see The Cinematics). Then there are those albums that don’t fall into either category; maybe you listen a few times before you start to have strong feelings either way. I Can’t Go On, I’ll Go On is one such album — after having it on repeat for days, I must say I’ve fallen in love.

The first impressions are positive, with hints of Elvis Costello (“On the Bubble”) and the Flying Burrito Brothers (“Shiftee” could be “Hot Burrito #1”’s long lost cousin). Wilco, The Jayhawks, and other alt-country heavyweights also come to mind, as do fundamental rock 'n roll bands like The Beatles on certain vocal melodies and harmonies. But ultimately the songs belong to The Broken West, without appearing as rip-offs so much as possibly homages.

“On the Bubble” launches the album, lusciously building a sonic dreamscape where handclaps and harmonies abound, and is followed by the ‘60s-feel of “So It Goes.” And then, BLAMMO: “Down in the Valley” hits you with a hooky chorus that’s pop magic. This will likely be the song that the college radio DJs take a fancy to. The aforementioned “Shiftee” follows (I swear, Gram Parsons is smiling down on this one), then “Brass Ring” starts with a jangly intro that evolves into a full retro-licious pop number. The album continues in this fashion, each song wholly satisfying and unique, before winding down with “Baby On My Arm,” a spookily gorgeous song that tiptoes into darker territory and flows into final track “Like a Light,” a gut-wrencher that gradually grows large, then recesses into softness for its final seconds.

The piano is a main ingredient of the band’s sound, and it makes quite a contribution to the overall flavor. And by piano I don’t necessarily mean keyboard or synthesizer — the sound of good old-fashioned piano keys can be heard quite clearly on many songs, especially “Big City.” Maybe it’s an electric keyboard’s impression of a baby grand, but if so, then it’s a dead ringer. In an indie-rock era when the unmistakable sounds of synths and synth effects have almost become as usual as guitar-bass-drums, such organic sounds are refreshingly welcome and even overdue. Almost as notable are the constant shaken things. Be it tambourine, sleighbells, or what you will, many of the songs employ percussive instrumentation (and/or handclaps), which just adds to the many layers that give the sound an unmistakable depth. That depth is the key to this record’s success.