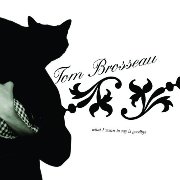 What I Mean To Say Is Goodbye

He's not quite thirty. He's lived in this town forever, it seems. He walked in on his best friend making love to his sweetheart. His mother and father lost the farm, but he had to stay in town to watch it go to some other family while helping out at the garage. He's still thankful to have the moonlight, though, when he walks home from work, and that makes him thankful. When he sits out on the big rock at the end of the yard in the small house in-town now and plays and sings for his friends, they know he would have been a star before rock and roll, before the atomic bomb, before his best friend made love to his sweetheart in their bed.

North Dakota native Tom Brosseau is twenty-eight years old and he has created a completely convincing persona based on the light, melancholy songs about busted boomtowns and hard times and flying away that five decades ago would find their ways to Nashville somehow. He plays shows often with artists like Aimee Mann and John Doe, and sounds as similar to them as they do to each other. It's "That Feel," as Waits said, the feeling of a vagabond's heart directing the fingers on the steel strings.

There is an unsettling sense that it is not a persona. Sam Jones, who directed Wilco's I Am Trying To Break Your Heart, has produced these twelve barely adorned songs exquisitely, letting Brosseau's magical voice be the center, though it is the singing of the too-smart wallflower boy in the corner.

I don't know how it ended up in Seattle on the Loveless label, but that was sure a keen idea of its owners (including John Richards) to release it. It's not alternative anything, it can't be simply categorized as country music — it is pure song in a quiet place, pure storytelling about heartache and how that makes life kind of special too.

The names of the additional players startle: The strings of Nickel Creek's Gabe Witcher and Sarah Wilkins gently kiss the delicate palette, while the keyboards of Benmont Tench (Tom Petty) and the brushes and snare of Pete Thomas (E. Costello) can barely be noticed. This is a good and bad thing. Though the hushed focus on Brousseau's voice sets a great mood for the whole album as a piece, Angela Correa comes along the prairie to sing the dark spiritual "In My Time Of Dyin'" — and her conspicuous presence makes one wish there were a little more diversity in the textures, tempos, and arrangements. And yet that somehow seems like a stupid thing to ask for, this being the hick-Zen sound-sanctuary that it is.

This album gets such a high rating for being so original, so consistent, and for having one of the best songs of the year, a gorgeous Hank Williams betrayal baying, "That's When Your Heartache Begins."