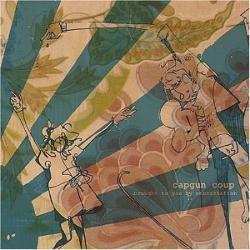 Brought To You By Nebraskafish

Schizophrenic isn't typically a good word to throw at an album, is it? The term gives off a negative vibe at first, describing a lack of cohesiveness that would turn most people off. Nothing is worse than a band that can't make up its mind.

But schizophrenic is the only one that sticks to Capgun Coup's debut LP, and they apparently welcome it. Their PR copy makes a point of the act's variety of influences — indie pop, avant garde noise, nerd rap — while pointing out how the band members are so unfamiliar with the acts to which the press would compare them. Which is fine, because no one really likes to be compared and because the album eventually proves itself to be full of compelling hooks and infinite energy. But damn if it doesn't take a while.

A large chunk of the album's near-hour of play time consists of little vignettes of sound and samples, from the albums opening track that samples a JFK speech to the goofy guitar noodling that rides out the end of "Adorable Doorsteps." Capgun Coup love to play with sound collage, just like any number of indie bands who want to to sound experimental, but these pieces don't add anything to the work itself. They're filler, something to skip to get to the next bit.

It's frustrating that it takes three tracks to get to the first fully formed song, "Social Security Number." A lone, faraway drum set kicks off, followed by droning bass that signals the crescendo Greg Elsasser's vocals bring. Beneath the shouting and buzz, a simple hook emerges that momentarily holds the chaos together, but things fall apart in a shower of art school collage and ambiguity. Which is fine, and pretty interesting for the first few spins, but Capgun Coup is capable of so much more. The chilly, meditative "Time" is a welcome change from the tape machine wankery found earlier, and the point when the album hits its stride.

Manic tendencies can work — See The Cure's entire oeuvre — but Brought To You By Nebraskafish often feels like it's being pulled in multiple directions at once. The aggressive fuzz spilling out of "Uh Huh" doesn't mesh with the flirty "Adorable Doorsteps" or the doo-wap drama of "My Tears Cure Cancer." What's more disconcerting is that, individually, most of the songs are fantastic. Putting them side by side, however, leads to aural whiplash. An album of songs like "Fucked," the standout guitar-pop track here, would be welcome, but as it stands, Capgun Coup's artistic brand of ADHD keeps pulling the listener by the ear from one end of the spectrum to the other. It's a fun but disorientating ride.