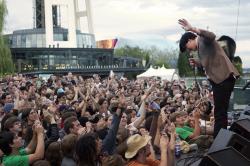 “’Bang Bang Rock and Roll’ is not a question,” declared Art Brut’s charismatic and Very British frontman Eddie Argos early in the band’s Sunday night Bumbershoot set, “but it has all the answers.”

For any other rock star to declare that one of their songs “has all the answers” would sound preposterous. Actually, with Argos says it, it sounds absurd, too, but he’s in on the joke. For over an hour and twenty total songs, he treated the audience to a phenomenal set that was part rock show, part college lecture, part solo performance art. He doesn’t so much sing as opine with music (loud, guitar-driven rock music) behind him.

Is Argos full of shit? Of course he is – and that’s the charm, that he's wonderously well aware of it. In “Bang Bang Rock and Roll,” he declares songs about sex and drugs and rock and roll boring in a song about those topics. Also, before “Emily Kane,” he gave the crowd some relationship advice and ordered the audience to cease dwelling on exes – and even giving the exact time to stop after a very extended pause for dramatic effect. The song? Well, the opening verse goes:

"I was your boyfriend when we were 15 It's the happiest that I've ever been
Even though we didn't understand
How to do much more than just hold hands
There's so much about you I miss
The clumsy way we used to kiss
I wish I convinced you, you've made a mistake
If memory serves, we're still on a break
Other girls went and other girls came I can't get over my old flame
I'm still in love with Emily Kane."

Early in the set he told us that “pop culture no longer applies” to him but mixed lines from songs like “99 Problems,” “Hollaback Girl,” and “Rehab” into Art Brut’s songs (the latter was especially funny when added to “Moving to LA”: “I don’t wanna go to rehab, no no no – because I’m drinking Hennessey with Morrissey”.)

I’ve spent the entire review discussing Eddie Argos although Art Brut is, of course, a rock and/or roll band – Argos even commands them before songs “Go Art Brut!” – but all eyes in the audience pointed toward one person on stage. The set was a commanding performance from Argos and company, who blistered through 20 songs in around 70 minutes – even finding the time for him to sprint through the throngs of people.

This was the last show I watched Bumbershoot weekend and one of my absolute favorites. I can hardly wait for the next Art Brut show in Seattle. Fortunately, it’s only two months away.

Before the final songs Argos told us the set was coming to a close but said the bright side was that the remaining songs were "huge hits." In my perfect world they would be.