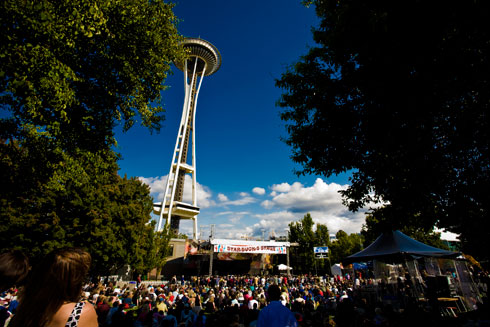 Bumbershoot 2011: Cheat sheet for mutants and marginals, Day One {Saturday, 9/3}

I've been going to Bumbershoot for, say, around 500 years (post-the Age of Enlightenment made it more awesome, though — since then there's been less jousting and witch house-burning). There are going to be some regional and national musical acts at Bumbershoot 2011 I probably won't dare to miss, though some of them I'd rather take in at the succulently sweet-aired KEXP Music Lounge (where eager interns literally towel off any sweat from performers and audience members alike with yellow and black silk kerchiefs), dandy wuss lad I've withered into being at shows. The ML features some extraordinary guests this year by the way, where I'm planning to shabazz it up like a vetiver granting many lees to all the buffalo, if you catch my mad rad tennis drift.

Wait a second, the line up's not secret anymore? And is subject to change? Thanks, handy Bumbershoot 2011 website! At some point though,  the fine folks in the Music Lounge will probably want me to rotate my seat to others and kick me out so I have to sully my shoulders with savage civilians, and if you're a finicky fuss-budget like me you want to have a coherent idea of what's razzle-dazzling outside in (argh!) daylight. So: for my fellow jaded specialists, here's the wonderful Bumbershoot 2011 cultural weirdness what I plan to be figuring out to catch when I'm not waiting in the comedy lines…

12 p.m. – 1 p.m.: Tomten at EMP Level 3 Stage
Yes, I'm starting with a band that starts just as the festival starts — but get to Bumbershoot just when it opens this year, because this is no ordinary band. This is a cider-juiced J.D. Salinger of rock groups, the Alex Chilton on absinthe fronting a frollicking Kinks of posh-garage, the charming conquerers of this year's EMP Sound Off! competitions (wild card win! Woot!), and there's a whole lot of swoon-croon and kool-keyboards involved. As magnetic as they are literate, as frothy as they are intoxicating, let it all begin with the masterful tunes of Tomten. The Level 3 Stage is kind of a weird venue (new I think for the 'shoot), but Pop Conference fans will remember that it is upstairs from the Science Fiction Museum (which I believe is branching into Horror, according to Taking Punk To The Masses creator and EMP curator Jacob McMurray, so mutants be aware of that too).

1 p.m. – 2:15 p.m.: Kevin, Who Is Duffy Bishop, And Why Is She Not World Famous? at the 1 Reel Film Festival
All I remember about Duffy Bishop back in the day was that she reminded Seattle venue-vultures how cool Janis Joplin is, and how rock history sort of gives her the shaft whilst it waxes on about Kurt, Jim, Jimi, et al. Bishop was doing this in the 80s, which inspired some filmmakers to start working up footage about her hip-shaking and clap-happy shows. My guess is at least some of that will be in this doc, which is a great topic: just as Bishop herself was a great alternative to the female-led "granola-blues" (thanks, Clark Humphrey, for the genre tag) bands she surpassed and shined over.

1:30 p.m. – 2:30 p.m.: Kris Orlowski & The Passenger String Quartet at EMP Level 3 Stage
Orlowski has worked with Macklemore strings-arranger Andrew Joslyn to blend the folk-rock of compatriots Fleet Foxes and Grand Hallway with straight-up classical/baroque/romantic arranging. Curtains For You's very talented Matt Gervais is only one of the many stalwart talents to contribute to Orlowski's new five song EP, and for his Bumbershoot debut the line up is Mark Isakson (Kate Tucker and the Sons of Sweden) on pedal steel/banjo/guitar,  Torry Anderson (Washington Mile) on keyboard/glockenspiel, and Ivan Gunderson (The Courage, Lowlands) on drums.

3:15 p.m. – 4:15 p.m.: Astronautalis at the Fountain Lawn Stage
I really love Astro's new album This Is Our Science, which seems to tap as much into his Southern Floria battle-rhyming swamp roots as it does his squat-playing in punk clubs in Germany as with his bitter break-ups and freaky obsessions (homemade tats, D&D, and a whole lot of science and history texts). Truly edifying, and strange, but by no means unemotional hiphop. And: watch for my interview with him at City Arts Blog on-line soon!

4:45 p.m. – 5:45 p.m.: Weird and Awesome With Emmet Montgomery at the Vera Project
Arachnids! Variety shows set in the dystopian future! A growly guy who will happily harangue an audience with love. I'm there.

5:15 p.m. – 6:15 p.m.: Why Nerds? Why Old Timey? Why Now? at the Words & Ideas Stage
Programming maestro Chris Weber of 1 Reel and Astronautalis, his selected maven-curator for this "Why –?" event series (which was immensely packed out last year, so get in line early) for all three days of the 'Shoot, have a ton of fun lecturing and sly performance art lined up for the audience. The first day's topics dive deeply into Astro's own fandom, and then into the somewhat antediluvian fandoms of others.

5:45 p.m. – 6:45 p.m.: Shabazz Palaces at the Fisher Green Stage
Just because they're so fucking amazing, that's way. You can spend the rest of your life unpacking the adult-targeted clues and miracles of music layered and triggered through the work of Ishmael and Tendai (with THEESatisfaction helping out), or you can just gorge on the glory with the rest of us fanatics. Sometimes the mainstream lets in a cool, cool current.

6:00 p.m. – 7:00 p.m.: Comedy Bang Bang at the Bagley Wright Theatre
A live version of a podcast with Scott Aukerman (Mr. Show) and one of my personal favorite comics, Paul F. Tompkins. They're both extremely smart and subversive comedians, and this should be as thought-provoking as it is automatically hilarious.

6:15 p.m. – 7:15 p.m.: Amy Schumer and Eugene Mirman, at the Intiman Theatre
Meanwhilst I am enjoying the satirical variety show described above, my wife will probably be at this, drooling over her mental doppleganger, Eugene Mirman, the wickedly sharp but sweet schlub who she has a profound and disturbing crush on. We'll both be laughing but I shall be also fuming with jealous rage! Here's some Real Talk: Amy's been in a lot of shows I've seen on HBO and elsewhere but I don't remember who she is but she is very cute in her promo photo, and those are very funny shows (for example, Curb Your Enthusiasm).

7:45 p.m. – 8:45 p.m.: Doug Loves Movies Podcast, at the Bagley Wright Theatre
Doug Benson is a really good comic. His material is usually pot-based (as in his doc Super High Me, in which he "suffered" getting high every day for a month "as an experiment" to parody Super Size Me, and Mickey D's played a large part in both films) but he loves the shit out of movies and loves the shit out of chatting about them too, just like I do, so I will be there listening to him do just that. Providing I can sneak my humungous monster bong past those elderly suited maitre d security types in the BW Theatre lobby, of course.

8:30 p.m. – 9:30 p.m.: STRFKR at the Fountain Lawn Stage
Hopefully — still with my tits ripped off by the gruesome green bud goblin — I will take in the glitchy boom pop of these fairy princes of Portlandia, who are rumored to be Roxy Music weird and Dance Party USA wonderful.

9:30 p.m. – 10:45 p.m.: Mavis Staples at the Starbucks Stage
God is a weird thing, and gospel music can be strange in the best way, but Mavis Staples doesn't do the weird stuff, she does the spiritual music that touches everyone's hearts, including the decidedly non-spiritual. I know athiests who love the shit out of her, and that's a great way to show how much you love Jesus. Right? Right.

So, I know some of these flow into each other (matter transporter, future! Bring it back to us now!) and I have probably left out a whole bunch of stuff (and some of them on purpose). But here's my skeleton crew of a personal schedule for my own Bumbershoot 2011 experience — and for my stalker who has yet to insert that GPS tracking device under my tuckus.

See you in the weird shadows of the mighty space needle at the tourist & troll-happy Seattle Center, fellow freaks!