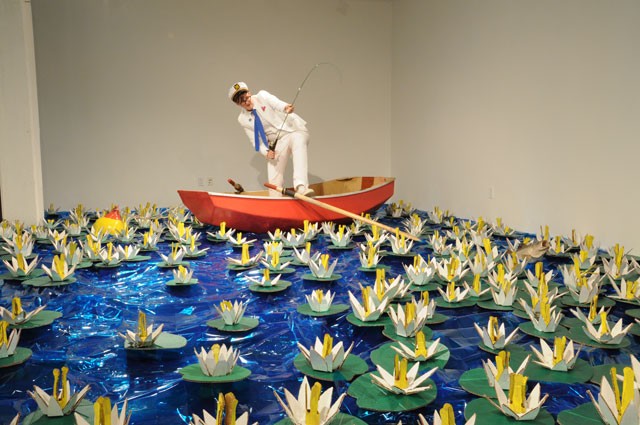 No need for a loping intro to this one. For future reference, this is what happened on Sunday, August 31st at the Seattle Center. For a slobbering, no-good-for-shore music fan of many decades like me, it gives full on braingasm to try to wrap my skull walnut around it. These blurbs will be reasonably tight (save for those evoking unrestrained fanboy blather), because there is no need to elaborate much on how incredibly awesome the line up was in the apex day of Bumbershoot 2014. Bravo, B-shoot!

I missed out on the first Dream Syndicate album in the early 80s, because reviewers kept comparing it to the Velvet Underground, and frankly back then I was trying a little too hard-core. (Plus, the VU were having some reissued material out at the time, and I thought it was a little redundant. Why not go to the source?) But then their second LP The Medicine Show arrived, and even though it got less excitable reviews, I got on board. For me, it was similar to the backlash that the Violent Femmes suffered, and I am one of those nasty little contrarians that prefer both band's sophomore releases (more fresh reinvention than slump IMHO). Brilliant guitarist Karl Precoda left after Medicine Show, and won't be at this exciting live revival, in the ultra-cool KEXP Music Lounge, but that shouldn't stop you from coming to hear one of the most generous uncles of indie rock. That particular LP holds delights like "Bullet With My Name On It," "Burn," and of course "Daddy's Girl" (super-size trigger warnings on that one, kids), and if they play any of 'em, you'll be hooked for life. Trust your forlorn, college rock-founding uncle; he may have forgotten your birthday, but he would often stagger in after hours and throw you the keenest hooks, darkest laughs, and imported intoxicants.

A better question might be, why not have Bronies and Juggalos wrestle? Are Bronies a youth gang now too? Does the FBI monitor Bronies? (If I was in charge of the government, it would!) Anyways, it's freak fandom kingdom come time. Come hear about the kinda neat way otherwise regular dudes bond over the simple and edifying morality tales of My Little Pony; and get on up on how Juggalos look out for each other while somehow going ritualistically going bat-guano gaga at rap rock festivals etc. The scenes are both actually a lot more fascinating than you may think, even if you don't care about the chosen mediums.

Best Rock Band in Seattle, according to Seattle Weekly, and no one is complaining. HIT IT!

I love swanky funny melodic stuff, and everyone tells me not to miss this. Like Hobosexual above, sometimes adding humor to a genre can make all the difference. I'm not usually into these kinds of sounds, but this is when a fun-friendly spin can turn all things around. Recommended!

The otherworldly femme fatale vocals will melt that gun right out of your trembling hand, detective. What's that, the floor is disappearing from beneath you? You're going down into The Big Sleep but trust me you'll feel more than just a little death. Exquisite, elegant noir-pop that is a must-see for all fans of the best years of the label called 4AD.

Excellent Central District-based conceptual agents of The Project Room present an hour long variety show that is immersed in a subject I can never get enough of, "Why do I keep [email protected]#ing Up?!" Carrie Akre! (love her, and you get to hear music life fails!), Kellen Conway (playwright mangles! Oh man that's gonna be good), Brett Hamil (writer and comedian bungles! And this guy is extraordinary with self-deprecation so prepare to laugh till Brett's mom cries). Hosted by Emmett Montgomery, one of the very best emcees in Sea-burg.

Hot sludge-asphalt assault kings Akimbo and The Ruby Doe made a baby and OH GOD IT'S EATING THE NURSES HEAD!!!!!!! Hide the painkillers and start filing the lawsuits.

The Stooges of rap. The Fear the Record of hip-hop. I'll fight you if you disagree with me. I'll fight with THEM if they disagree with ME! I'll fight everybody! Don't miss these baiting bastards biting on hard-ass beats, all gnarly snarls and Swisher Sweets swagger in full Anti-Social Behavior Disorder galore.

I am still waiting for W. Kamau Bell to officially release more of his incedibly insightful and ferocious topical humor, which should be spread everywhere on loudspeakers, but it's gonna be GREAT to get into it live. Michelle Buteau is famous on the teevee and probably very cool and looking forward to sampling her comedy live too. Janeane, Janeane, Janeane, you turn my heart into a jellybean. I know your sinewy synapse-snapping social observations going to kill it, sister. (She's probably the one comedian besides Brett Hamil I will be seeing more than once this B-2014).

Even deeper underground than the above, and for fans of the real Cascadian creme center, check this out:

Yeah, now you know what the regional DIY soldiers are doing. This above might be my favorite action all weekend. Shh, don't tell any buzzkills.

Not even going to try to sell this one. As with Wu-Tang Clain on Saturday, would you really MISS IT, even if I didn't write DON'T? Some of the very best groove and female empowerment soul hustle of the 90s, I still have the LPs, and love this band of three very bad-ass women. A TIG thing, you understand. ESSENTIAL.

I would recommend this, but it's going to be packed out. He's very quick, very charming, very smart, and that sense of humor you inherited from your suavely enchanted but disgruntled older relatives has a lot to do with him. Concepts of synchronicity, The Conspiracy, counter-culture mythology, etc., all go back to this hippie. Again, none of us are getting in (especially with this weather, which makes the Words & Ideas stage into an Ark of tourists — and remember, they're all his age), but if you can, make do and see.

DIY demigods not afraid to chew through reams of Cease & Desist orders faxed by lawyers, these perennial post-Situationists put on the most delcious mockeries of everything the Establishment holds dear. This time around they're making fun of god, so good luck if you are at all sensitive to what believers call "blasphemy." I'm hoping their head-enemas hold up. and that they haven't bitten off too much satirical communion to chew on. But between you and I, I wouldn't miss this show for the world. Also: If you think you like spoken word-noise-sound collage with bite, go buy their classic Escape From Noise, a much more important record than Nevermind.

They're back! Local crucial Goth punk poppers come back to burn your gymnasium down again! It's society's fault, "The Man" made it out of wood! Lots of swoony 00s punk and rock club kids will be swarming this one. Welcome home!

REALLY! DON'T MISS THEM! Everyone is going. You may not think you love The Replacements, but every real rock band since 1987's best songs have their DNA in them, and frankly The Replacements did it all far better first. Alternative Nation's The Beatles. Sure they had less than a fourth of the amount of releases the Fab Four put out, but I'll take the B-side "Beer For Breakfast" over "Let It Be" in a skipped heartbeat.

American art-rock at its most creative, confrontative without being abusive, inspirational, and irresistible. This was the kind of band Europeans said could never come out of a place like here. We showed 'em. If you love Gang of Four, The Mekons, Wire, etc., but still haven't experienced

All-star bash celebrating an almost non-album; an unfinished masterpiece by Alex Chilton and his band Big Stars before he flowed down a river of charm-angst and anti-remorse. He did it his way, delightfully yet demonically describing burnt out husks of emotion in an age when people were still tying the yellow ribbon around the old gold tree. I would list the players but frankly be surprised, you'll be happy you are. Personally, I think it's a weird choice to try to put all this together live by guest players, as I love the mystery, never wanted it solved. Then again, maybe I'm just taking a really cool thing for granted. Nope, I'm going!

Rumors that they've "gona ska" should be put to rest by this performance. Ska never used a Theremin! Sheesh.

DON'T MISS EITHER OF THEM! And let me know how you did that, because this is a terrible collision of two incredibly awesome performances. Get the coins out and be ready to flip 'em! But seriously, this is hard. Rootsy, arty, soulful topical rock and bittersweet ballads from Lost Angels versus The King Of Funk Bass. By all rights, they should be jamming up there together. It might make more sense than trying to duplicate Third (Sister Lovers) live. But hey, better too much gold than all out of love, ifyouknowwhatIamsaying.