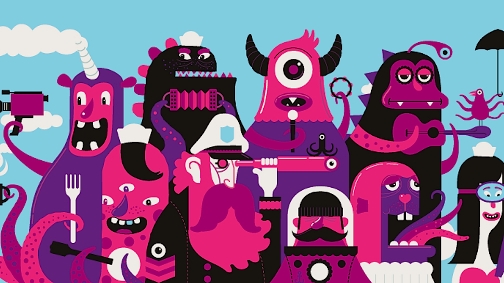 Bumbershoot 2014: the Saturday of your life

“It's never too late to have a happy childhood.”  ― Tom Robbins

I am looking at the Bumbershoot 2014 schedule for the first time today. Just two days before it all comes down. It's not because I'm lazy, though I am that (sometimes). Or a procrastinator (all the damned time). I prefer to walk into Bumbershoot blind, peroxide-clean, wet eyes stinging from smoke like a resurrected bird from some trickster's ashes. To play. Not music. I'm not a musician. (I may have been, once.) But I play with what I want to experience. So to do a preview for you takes great pains, as I would much rather love experiencing every Bumbershoot like adolescence the first time through; scared deathless.

So this is what I would do if I were you when you get there. But I refuse to be strapped into time constraints. I want to construct this schemata out of need — out of greatness expected from previous experience and performance and recordings — out of play. There's a general schedule, but I fully intend to throw us into every ditch by the side of the clock on the way.

What Goes On: Saturday, August 30th

Never seen 'em live. They tend to play all those hippie festivals, right? I have the feeling this will be a great way to wake up though. I loved The Gossip! I wonder if that skinny little girl I danced with at CHBP to The Gossip remembers that we were the only two people dancing that afternoon. Swarms of Seattle statues standing statue-like still. Hey, do people dance in Seattle yet again?

Roderick has a beard? Really? They couldn't get anyone beardier than him? *Ahem.* Peronally, I hope he changes it up with "Skip" — I'd have my sticky tip money ready if Roderick would do the twerking instruction instead. Come on. Roderick. Twerking. Possum-slaw! Anyways, spending time with John Roderick is like hanging out with Bob Dylan-at-his-coolest-and-most-funny in the doc Don't Look Back, except he's picking mostly on himself. This makes me very happy. [Editor's note: A++++.]

If you were there that night at the EMP Sound Off! this year when it was a sure bet Mr. Terry was going to win that whole damned battle of the bands, you wouldn't think of missing this set. It's not his work with Hightek Lowlives, it's even more intimate and less restrained, and you might just stop here and go home after he unleashes… real soul music.

This is a little complicated to understand, but trust me: it's the right thing. Seven electric minutes from each writer, a great time limit, keeps 'em popping. Long-time TIG supporter David Schmader is one of the judges, so just hearing his deliciously dry wit in response to the contestants should be worth coming in for.

2:30 PM, Comedy at the Bagley – StarTalk Live with Bill Nye and Eugene Mirman

Eugene Mirman. Doing anything. Bill Nye, who I imagine is really Cliff Maps. When I read Cliff Maps, I hear the voice of Bill Nye. It's a Seattle thing.

I'm taking what they're giving 'cos I'm twerking for a living. Twerking for the weekend. Finest Twerksong. Right To Twerk. Twerker's Playtime.

Okay, I'll stop. This is what you wanna dance to on the grass for sure. You know, dance. You guys all do that now, right?

This new jazz vocalist's slippery sultry saucy Blue Note-label album Liquid Spirit got played all year in the Big Freak Media offices. Match this with Otieno T. earlier and you will have an absolutely aces first day at the mighty Bumbershoot, without even hearing any forlorn music about teenagers breaking up sung by 40-year-old dudes everywhere else on campus.

You should probably come hear the estimable Brangien Davis chat with that bourbon-bittersweet little dude from Magnetic Fields, Future Bible Heroes, the Gothic Archies, and that one really weird tour with .38 Special. (Stephin. OHMYGOD. Merritt.) Five minutes of Merritt quipping, Quentin Crisping, slipping crispy bon mots beneath your attention span is worth the admission to three other festivals. Hooray, Bumbershoot! One time I intrviewed him and borrowed a question from a big fat old rare book of interviews, and after I asked him that question, he named the book to me, and said he liked it too. If you're an aspiring songwriter, music writer… oh jesus, just trust me.

I don't know anything about them other than from the schedule, in which they are "female-focused (but not female-exclusive)" comics, and I'm all about that. There's some other misogynist comedians at the festival this year and I am going to make sure I see every woman-friendly comedian troupe instead to make up for their odious presence. Not even kidding.

Dolorous, heart-aching sweetness. Grand Hallway dude under his own name, his songcraft a gorgeous shimmer of soul love. Bring a date, later snog like snakes on speed (but get a get room first, jeez!).

They had to cancel their appearance at the Light In The Attic Records Summer Extravaganza (caveat: I drank up all the label's bourbon at that party the first five minutes I was there and then started crying, left by 6:30 PM), so now you can catch up with them! More caveat: I've never listened to Donnie & Joe Emerson! They created a whole rock and roll world for themselves in Spokane, decades ago. It's a magical world lots of critics love, and this is how I want to discover D&JE for myself: live at Bumbershoot. Please do this with me. Then I will go home with you and drink all your bourbon while we listen to their Light In The Attic records for the first time.

It's Paul F. Tompkins. Doing anything. See it. Most wonderful comedian alive. Not the funniest, nastiest, most brilliant. Just such a sparkling spirit, unpretentious, vulnerable, and genuine. And very very very funny.

THEESatisfaction helms this, the most important cultural event you will ever witness. It's like a Black Queer EMP Pop Conference with killer mixes and dancing and it is the shape of things to come. Might be hard for anything to follow this. Riz Rollins, Erik Blood, and other true Seattleites touching deeply and changing everything with their stories. Tastes like a movement and feels like disco-very.

Brett Hamil, Duane Goad, Cameron Mazzuca, Brian Moote, and Jonas Barnes doing funny. The most hilarious minds of our general populace, blossoming right in front of you. I am in particular a big fan of Brett, whose comedy writing and cartoons in City Arts Magazine proves how perfectly in-touch that glossy is. Do yourself a favor and skip some packed-out super-comic complaining about customer service from an airline, and hear some street-legal ground-game gotchas. This is one of the biggest up-and-coming regional shows to hit at the festival.

6:15 PM, Mainstage – Elvis Costello and the Imposters (DON'T MISS THIS!)

You should never miss a chance to see Elvis Costello live. Solo, with a band, with anyone else. He fills up any venue he performs in, as big and bold and baroque as Sinatra, and it's a good bet he'll kill it at the Mainstage this year too. Costello is kind of like a the anti-Dylan: You go to see Dylan because anything can happen, it can be great, it can be awful, hey, it's Dylan, you saw him before either of you died. Costello has never been in better shape, he is super-generous with his best songs and always spot-on in performance. Sure, he's probably going to play some of his newer works I just can't ever seem to get into no matter how much effort, and yeah maybe I don't ever need to hear "Watching The Detectives" again (one of my favorite songs of all time, but does he ever not play it?). BUT: He might pull out "Talking In The Dark," or "I Want You," or "Veronica." And he will thrum your heart and massage your feels, ferociously. Not kidding: He's one of the last of the few real greats still around, and you will have that realization wash over you with every dubby bass-line, organ splash, crunchy strum, crowded croak or quicksand croon.

Nope, I don't have the album. Nope, I don't have either Aimee Mann's or Ted Leo's last couple albums either. I've always loved 'em but I've been busy. I'm hoping this will turn me around, get me back on track. Seriously. I want to dive back in. I have the feeling this will be that eternal return-discovery you in many ways come to Bumbershoot for.

8:00 PM, Comedy at the Playhouse – Jeneane Garofalo and Doug Benson

I have kept up with these two, not always happily. Jeneane is a genuinely sharp comedian, but she kind of reminds me of novelist Denis Johnson: I'm forever loyal to her intuitive 90s slacker mysticism and mordant topicality. She's shrill, but someone needs to be screaming and fuming and I rage right along with her about a lot of it too. Yet, I often crave transcendence. Maybe this show will do it. Doug, he's legal now in Washington, right? I hope we don't get ticketed going to his show. Etc. etc.

If I didn't put DON'T MISS THIS up in the line above to tip you off, would you have skipped it? Nah, me neither. No way any of us are going to miss this.

Oh yeah, if you're not getting harder than Chinese algebra at the show above and want to feel your feet warmed by a God-kissed bliss whilst clapping your hands sore, get blessed by this soul maven. She should end your night like a deep tissue massage for your spirit. Classic R&B and a perfect way to end this swarm of everything all at once on the first say. Welcome home.