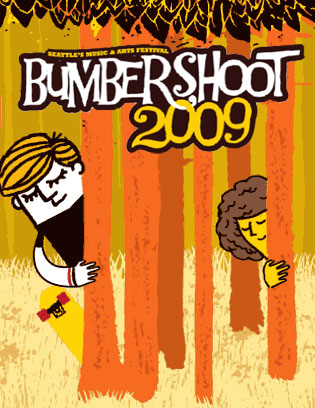 I snuck away from Bumbershoot for a bit to run back home to my Belltown apartment for a quick break from the insanity and crowds.

Let’s use this as the place to talk about the first day of Bumbershoot. So spill it. I’ll even go first.

The first thing I went to was the “F is for Food” panel with Tom Douglas and Kathleen Flinn. Both had a lot to say about food and eating and had a really relaxed and funny rapport. Douglas was the most quotable, saying that people could become “50% better cooks by just learning how to buy food”. When responding to Flinn’s comment about loving roast chicken, he noted that “a roast chicken in Paris is much different from a roast chicken from the Costco in Lynnwood.”

The biggest laugh, though, came from Flinn’s reading of an entry in the “Food for Thought” contest where someone wrote their story of trying to become vegan for a whole hour.

After that, I went to the Main Stage to catch Katy Perry’s set, which was as equally great and terrible as I expected.

Perry was complaining on Twitter this morning of being exhausted and it appeared as though she didn’t even want to play this show. Her cover of Queen’s “Don’t Stop Me Now” was a bad karaoke performance but she does have a big voice and brought a lot of energy to her show. Her voice, which sounded strained at the beginning of her set, grew stronger throughout the 50 minutes she played for.

What have you seen?