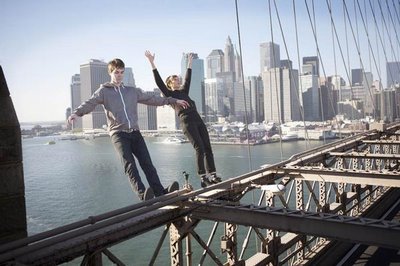 Hailed as the quintessential party band, Matt and Kim, a Brooklyn-based duo comprised of drums and keyboards, set ‘em up and knock ’em down with their straightforward yet powerful pop songs formed around a new wave backbone. Their synth sound is layered with Matt’s nasal-tinged vocals and a pounding of cymbals that makes every chorus a sing-a-long.

Their newest album, Grand, stomps and rushes forward in fits and starts that have garnered the attention of much mainstream media, including a Bacardi commercial where you’ve probably heard their song “Daylight.” Or perhaps you’ve seen them bare all in Times Square for their “Lessons Learned” video. Their barely-there melodies are secondary to the chanting spunk of their songs that seem the perfect formula to get listeners amped while still suffusing their songs with an arty dynamic that delivers a whole lotta fun.

If you haven’t seen this pair in next-to-nothing during a New York City winter, here’s the video. Catch them playing the Broad Street stage on Saturday at 6pm during Bumbershoot.