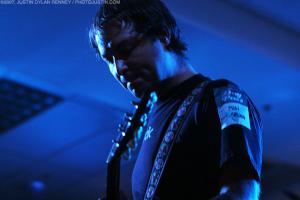 {Imaginary correspondent elle was an interviewing machine at Bumbershoot 2007, and Three Imaginary Girls is proud to present loads of her video interviews with some of your favorite bands from the Pacific Northwest, including Viva Voce, Aqueduct, the Trucks, and more! See all our Bumbershoot 2007 coverage!}

Originally the Saturna interview was shot in the load-out dock, but John Legend was just too loud, so luckily the guys were down for finding a far away spot. We had to restart a few times, haha. Backstage while I was waiting for them, frontman Steve's dad was plugging the band to me. As if I wasn't about to interview them! But, gotta love supportive parents.

They said this was only their fifth Seattle show, and they're from the NW!