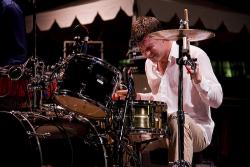 Almost a year ago, I checked out this band called Battles merely on their high recommendations from friends. What I witnessed at Neumo's completely blew my mind away, something I could not have prepared for beforehand–to the point, they were my vote for the Best Show in 2007.

Imagine my anticipation when I discovered they would be playing Bumbershoot, one of my favorite times of the year. With bated breath I waited all weekend for them, although it was a rather long breath as they were one of the last to play the three day festival. Fortunately the wait was not in vain, as the New York quartet brought out their full force best.

Just what makes them so great? For starters, they are one of the most innovative bands currently out there. This isn't good ol' garage rock or soft AM-radio inspired indie folk: Battles takes math-rock from geometry to calculus, and if that wasn't enough, toss in an array of electronics to keep you guessing what is coming next.

Combining all of the keyboards, pedals, synthesizers, loop machines, laptops, various black boxes with switches and digital displays, you would think they'd need an army to man this arsenal. No, instead they each play guitar with one hand while constantly flipping switches, tapping on keys, and who knows what with the other. Sure, the drummer merely has a drum set, but his fevered playing more than makes up for his disproportionate gear.

They do all of this while having the biggest grins on their faces. I'm starting to believe, after the two performances I've witnessed, that the members of Battles are the happiest musicians. Particularly guitarist/electronics wizard Tyondai Braxton, whose energetic ear to ear smile never left his face the entire hour. He also provided this great tidbit of banter:
"Thank you all for joining us at Bumbershoot, underneath the Space Needle–Seattle's Statue of Liberty. Russia's Taj Mahal. San Francisco's… … …Eiffel Tower!"

I also think there is a correlation between their superior skills and facial expressions. As they crank out their angular riffs, their mouths move as if the resulting noise was coming from them rather than the guitars. The more animated their mouths become, the more complex their guitar pieces become, until their faces are a twisted jumble like the ensuing music.

As the audience is enthralled by their musical acrobatics, it's also worth pointing out the members dress very professionally. As past era entertainers used to look presentable before a big show, so too do Battles appear in button-downs and slacks. It's refreshing. No sloppy ripped up jeans and faded band shirts for these guys, as I've seen for both appearances I've caught as well as confirming through numerous live video footage.

The two obvious crowd-pleasers, singles "Atlas" and "Tonto", had the middle section of the audience bouncing around. The two songs, already clocking in at about 7 minutes each, were extended and turned into near jam-sessions. The fans must not have taken note of how drummer John Stanier had been reduced to a red mass of sweat by the end, as they cheered for more after the hour long set.

"People won't be people when they hear this sound," or see this band.