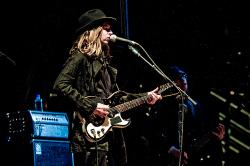 When I ask myself why I had such an incredible time at the Beck show, there is only one answer that truly explains it: because it’s Beck. To many people this line of reasoning is not justifiable at all, but to many others (plenty of whom were at the show as well) it makes perfect sense.

To me (and a great number of my friends), Beck has become a legend: less of a man and more of a mythical being. We have agreed that we want to know nothing of his life, his childhood, romantic affairs, nothing that would take away the splendor of his stage persona. So we thoroughly enjoyed his performance at the Main Stage on Saturday, although to be honest had it been any other band I would have been underwhelmed. But it was Beck.

The first thing about a Beck show that makes it distinct from most other concerts is the audience. Because Beck is, as Futurama put it, “a musician-poet who transcends genres even as he re-invents them”, the crowd he draws is extremely diverse. There were gangsters, indie kids and pot heads, there were tweens and baby boomers, and there was at least one man from England. These people weren’t just relaxing in the back either; they were packed into the claustrophobic first 50 feet from the stage.

There was a long wait after Band of Horses left the stage and the massive crowd cheered for basically any slender blonds who made their way on stage, of which there were two who were not Beck. When the man of the hour finally did arrive, he did so exactly how I would want Beck to do it, and if it weren’t for the Bumbershoot announcer’s annoyingly necessary introduction, it would have been perfectly discreet. Dressed in a too big black coat and a matching fedora, Beck walked on and just launched right into “Loser”.

As the performance went on the massive board of bulbs behind Beck illuminated to form increasingly complex shapes, from simple geometric polygons at first, to dead trees, flames, and even Beck himself. The set was full of hits and most likely satisfied all walks of life that came to his show. There was the sweet and catchy “Think I’m in Love” and the complex rapping of “Where It’s At.” Halfway through the show he abandoned the problematic mic he had been using and donned a headset, “like ‘N SYNC” he informed us. Then he and his very attractive band abandoned their instruments and took up some clunky electronic remote controls. With these they lay down some digital beats and performed the 8-bit masterpiece “Hell Yes."

Being in the audience and surrounded with people all singing along, I realized how remarkably catchy all of Beck’s choruses are. Although most of the verses are unintelligible, his choruses are short, simple and addictive, and if anyone wasn’t singing along then I respect their willpower but frown on their repression.

I thought the set was very well arranged. It consisted of mostly hits (of which Beck has many), a few songs I was less familiar with, and about three quarters of the way in there was a period of slower songs which were just what I needed after dancing the whole time. He couldn’t have chosen a better song to close with (a standard encore with the five minutes suspense; “Is he coming back!” “He must be, they’re tightening the drum heads!”). The final song was “E Pro,” with a chorus that is simply na nas, but had everyone jumping and singing along raucously. There was even a mini mosh pit where I was standing.

It’s true that he did not address the audience very frequently during the show, and it may be a valid point that this stop in his tour was probably the same as any other stop, but I think that’s just a part of Beck’s appeal. He doesn’t try to make you like him with witty banter or funny stories. He simply presents to you his music and lets you take what you want from it. He’s the kid in school who doesn’t talk much but everyone knows is the coolest person in their grade. Some bands you want to get to know and therefore you want them to chat up the audience, but with Beck, I think its best he remains a mystery.

Beck left us as suddenly as he came. Like some legendary antihero, he rolled out of town leaving grateful villagers and broken hearts in his wake. It seems like everything Beck does is instinctive, like he can just naturally shift from pop to rap to folksy blues. I think his show had that same natural feel, like you weren’t necessarily watching a performance, but you were watching Beck do what Beck does. And that’s the best (and really the only) thing I could expect from him.