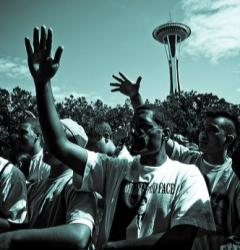 Bumbershoot is a musical extravaganza, spanning the three-day Labor Day weekend with more bands, arts, and elephant ears than anyone can possibly capture. We had a posse of imaginary writers (ChrisB, Chris Estey, imaginary elle, imaginary dana, and Cory), and photographers (Chona, Kyle, Nathan, and Andrew) all over Seattle Center, trying to capture the frenzy and mayhem of Bumbershoot 2008. Below you can see and read about our adventures during the first day, which kicked off with local electronic duo Beehive and ended with superstar Beck, and covered over 20 other bands in-between.

Beehive must be one of the most hard-luck bands in Seattle. The local electronic duo had gotten a difficult timeslot – Saturday at noon but tried to make the most of it. They played an energetic rock set that lasted about 35 minutes, simulating a rock band with electronic instruments. To get the crowd on their side early started off with two covers known by everyone in the fairly large crowd – “We Will Rock You” and “Helter Skelter.” Overcoming a scratchy microphone, they got a lot of the crowd to stand and even a few danced. They found their groove early and singer/programmer Alethea, or “Butterfly Beats,” delighted the crowd with her soulful voice. (ChrisB)

I’ve seen this band a bajillion times — I practically stalk them — and this was a very good show. They had a great dynamic with a pretty big turnout. They owned that huge stage. (Chona Kasinger)

Throw Me the Statue, Rockstar Stage

An important aspect to booking festivals is kicking things off with a band to set the right mood. Throw Me The Statue was just such a band, with their undemanding pop tinged with elements such as a backing horn section. Their crowd was comfortable enough to stand or sit, a few head bobbers sprinkled here and there. (imaginary elle)

Throw Me the Statue. Photo by Chona Kasinger.

Throw Me the Statue. Photo by Kyle Johnson.

It makes sense to put former Washingtonian Neko Case on the mainstage at Bumbershoot because it was the first time I’ve seen her in a venue big enough to contain her voice. She played for about 75 minutes and was funny and likeable throughout, making note of playing depressing country songs in the middle of the day. “Deep Red Bells” and “That Teenage Feeling,” played back to back sounded enormous and expansive – especially with three different guitar parts (Jon Rahouse on petal steel, Paul Rigby on electric guitar and Case herself playing acoustic guitar). She and longtime collaborator Kelly Hogan joked midway through the set that it was too early in the day for them to get wasted. Their humor was hilarious and provided a necessary balance for the emotional content of her set. {see the setlist} (ChrisB)

The aptly titled quartet Das Vibenbass bring the jazz vibe and bass to the 21st Century music listener, bringing the genre to a more accessible level. Hell, as their set progressed, I started to realize I wished we were listening to the local band–an upright bass, saxophone, drums, and vibraphone–in an exclusive, smokey hidden jazz club with a gin, rather than out in the sunshine on fold able chairs. Wait a minute… are they playing a jazz rendition of “Black Hole Sun” not in a cheesy Kenny G covers Top 40 sort of way, but a very slick, enjoyable way? Never mind, they do know how to bring jazz to the modern ear. Their entire set was brilliant, definitely fetching all the praise they have received, such as being nominated in the Seattle Weekly for Best Jazz act. Doesn’t hurt that their saxophone player was a good looking, well-dressed fellow as well. (imaginary elle)

Thao and the Get Down Stay Down, KEXP Lounge

Thao and the Get Down Stay Down photos by Andrew Waits.

In the dark crowded Sky Church at the Bumbershoot Festival yesterday afternoon there was briefly the flavor of a late 70s small club show, with the one “wavo” band in town that “got it.” The transgressive energy of sleazy humor (“Fixing The Chairs”), light-hearted Futurism, clipped robot rhythms, weird stop-starts (“TV Glow”), and shuffle beats from Shannon Brown (vocals), Elie Goral (drums), Derek Mason (keyboards), Vas Kumar (guitar), and (bassist) Griff happily entranced the hometown Seattle mob. The crowd wasn’t frenzied but it was very cheerful. Just like the shared similar aesthetic Figurines and Futureheads, The Girls is even better live than their recordings, wishing they would add more of that spontaneity and rawness next time out to their songwriting. It would be great if this city had its next Screamers, and this band maybe could be a contender for that role. (Chris Estey)

The Girls. Photos by Chona Kasinger

The KEXP Lounge is such an amazing refuge from the hurried, elephant-eared pace of Bumbershoot. There a few hundred lucky fans can see bands in a intimate dark (air-conditioned) setting. Catching Nada Surf acoustic style was definitely a highlight of my Bumbershoot experience; Matthew and Ira’s spot-on harmonies positively sent chills down my spine. Also of note: the bassist for Osma did an admirable job filling in for an injured Daniel Lorca. Watch a video of the band performing “Weightless.” (imaginary dana)

The Walkmen. Photos by Chona Kasinger.

Estelle, the British R&B/soul star, delivered what will be one of my favorite sets of the weekend. Playing before a huge crowd on the Fisher Green stage, she more than lived up to the buzz surrounding her new <em>Shine</em> album. On stage she reminded me of a cross between Sharon Jones and Lily Allen – two of my absolute favorite performers. Her band was tight and funky – although I wish they would have been funkier; their obvious influences are Parliament/Funkadelic, The Famous Flames and The Dap Kings and only on a few songs (“Pretty Please” and “American Boy”) did they seem to break out. “American Boy”, the #1 UK single that also features a cameo from Kanye West, closed the set and the enormous crowd sang along and danced – it was one of those great moments where a huge and diverse crowd shares a fantastic performance of a song that is the soundtrack to a whole lot of summers. (ChrisB)

I really enjoy !!!, the Sacramento-based, punk/funk/jam band but writing about them gives me fits with MS Word’s grammar check; using Google isn’t any easier. Still, their 30+ minute set in KEXP’s music lounge was great fun. Playing mostly newer songs (singer Nic Offer even said that they would give us “a hit and a half”), they still delivered the same dance punk they are known for. Offer might have forgotten a few times that this performance was being broadcast on the radio because he dropped the f-word a few times. The funniest time was when he said that he thought the room was full because we were all “the fucks who are going to see Beck tonight” (!!! and Beck is the most unfortunate scheduling conflict of the weekend) and threatened to give a crappy performance for the last song. They didn’t; in spite of their threats, they still rocked. (ChrisB)

Did you think Beck was watching a legend in action, as Imaginary Kiku did? Or did you think he was, in a word, bullshit, as ChrisB did? Our imaginary coverage has a little something for everyone.