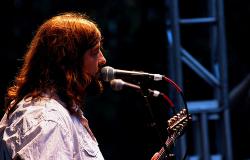 It's no secret that Aqueduct is my all-time favorite band and bedroom-pop idol. The front man David Terry is not only an extremely talented musician, but a genuinely nice guy who seems to enjoy every minute of his performances.

This was my fourth time seeing Aqueduct live, and it seems as if every show he plays is bigger and more enthusiastic than the last. My first time seeing Aqueduct was at a free block party where more people had come for the later showing of Napoleon Dynamite than for the band's lo-fi goodness. Now they pack a Bumbershoot venue with incredibly energetic fans who know the words to all the songs.

Aqueduct started their set with a personal favorite of mine, "As Close as Your Girlfriend Is Far Away," a particularly biting song from his Pistols at Dawn EP, and continued with some well known favorites which got the whole audience singing along. He also played his self-proclaimed fastest song, "Add It Up." It was amazing to me that he managed to make it even faster by slipping in occasional cuss words.

Carly Nicklaus (of "The Catch" fame) made a special guest appearance as guitarist during "Just the Way I Are," and stayed on stage keeping me with bated breath, always wondering if the next song would be an R. Kelley, as rumored. More stunning Aqueduct songs came instead, not that I was complaining.

The audience seemed to get only more rowdy as the night went on, and by the time the hard rock "Living a Lie" was played, a most surprising mosh pit had appeared. It was soon broken up by the crowd management controller, but I don't think he needed to bother; the universe would have corrected that blatant act against nature soon enough.

The amazingly ironic "Who Wanna Rock?" came up next, which did nothing to calm the audience down. Then, at last, the moment came. The rumors were proved true as David and Carly began their cover of R. Kelley's "I'm a Flirt," so fast I could not understand a word. It was an incredible performance, one that had also been done in Chicago for Lollapalooza '07. What a remarkable culture clash, and yet it seemed to work perfectly.

By the end of the show, I had joined the throngs of excitable fans who were literally hopping with energy. We were all high on catchy piano riffs and David Terry's talent for working a crowd. Predictably, he closed with "Hardcore Days and Softcore Nights," a fan favorite and a perfect way to end the party with a bang.

I have come to expect great things from this band, and they have not once let me down, but I can't imagine how the next Aqueduct show I see will be able to top the one I saw tonight. David himself said that this was the best show he'd ever played, and I would not doubt that for a second. I had no idea there were so many Aqueduct fans, but seeing that tonight, I have more hope for the future.