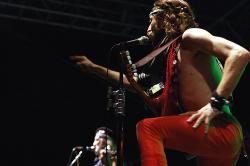 As I was walking towards the Esurance stage to catch Gogol Bordello, the final act I was to review today at Bumbershoot, barely a square foot of the Fisher Green lawn was unclaimed. Getting a good view to witness, from what I’ve heard, the mind-blowing live set would nearly be impossible. People were dancing to and riotously applauding the sound check.

It was then that I surmised that there were probably ten thousand people watching this performance and probably nine thousand were more qualified to write this review than I was.

It's not to say I didn’t enjoy what I heard from Gogol Bordello (which was probably 20 minutes; they were scheduled to be on stage for 90). In fact, quite the opposite. They call themselves “gypsy punks” and incorporate elements of countless genres: rock, punk, cabaret, Irish drinking music, amongst others. This is a special band to many, many people, one that has changed quite a few lives (and I'm sure probably changed a few more by the end of the evening).

I don't know how long the band was on stage or what songs they played (or even how many people played said songs), but I could assess the mood of the crowd – and that was electric. People all around me were shouting along with each song, they took advantage of each free inch to dance and strangers gave each other high fives at the start of each song because they loved that one and that was the one they wanted to hear. They probably loved every Gogol Bordello song, truth be told.

While I was watching Gogol Bordello I realized two things:

I was already tired but I was now nearly nauseous and hungry. For my friend Betsy Boston (and anyone else intrigued), here’s the clip of when GB was on Letterman a few weeks ago: