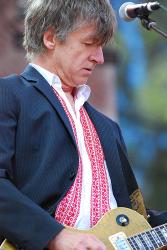 I kicked off Bumbershoot 2007 with nostalgia, heading to the Memorial Stadium Main Stage (or whatever the hell corporate entity it's named for now) to see Australia's New Zealand's own kings of sweet melodic pop, Crowded House, with a couple of pals. It was a great way to break into what would undoubtedly be a long and active Bumbershoot weekend. Hipsters, kids, and oldsters danced around in the sun, ate blocks of french fries the size of Rhode Island, and caught some rays of perfect sun while the dulcet sounds of the Brothers Finn and co. washed over the crowd like calm, tropical waves. Ahhhh, Bumbershoot!

I missed igLiz even more than usual during the set, as she's the Crowded House superfan while I'm more of a casual admirer. She would have been in great company – the place was teeming with fans, and the front area was packed with folks jumping up and down and expressing their general huge enthusiasm for the show. While I enjoyed the set (and marvelled over the fact that this was my very first Crowded House show ever, even after all these years), I was feeling a bit lame, eager for the hits and sad I'm not more familiar with the band's full repetoire, when the opening notes to "Don't Dream It's Over" kicked in. Huzzah!

Then a highlight that that made me feel slightly less lame: once the lyrics to the song kicked in, some (frightfully square) dude behind me proclaimed, "This is their song??!?! I had no idea this was their song! This is one of the Top Hits of The 80s!!" It never fails to amaze me how people can make musical proclaimations with such authority like that after expressing the deepest limits of abject ignorance. Good times.

Um, that was cool. And with that, I was ready to leap headfirst into my Bumbershoot day…