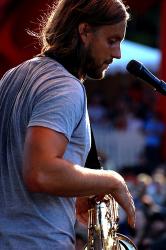 Portland-based Menomena has recently become one of my favorite bands with the release of their stunning Friend and Foe earlier this year {review}. I was eager to see the band live, mostly because I wondered how they would be able to translate all the complex instrumentals that make their songs so hypnotic. Would they go the Aqueduct route of using recorded background music? Would the rumors of a live choir prove true?

The latter was correct. The band began with the oddly dressed choir (someone remarked they looked like Harry Potter characters) walking slowly on stage singing the melody from "Boyscoutin'," and then launched into a set list backed fully by the chorus. It was a magnificent sight, but somehow I was not as impressed by the show as I thought I would be. The band was energetic enough and the music was played well, but it lost some of its fullness. Even with two drummers, the occasional saxophone, and a large choir, the outcome did not seem as well put together as I had expected. To their credit, this was only the second time they had performed with the choir (in fact cue cards were needed to help them with the lyrics).

Perhaps I had been spoiled on the incredible charisma of the Lashes, but I was not much impressed by Menomena's stage presence either. True, it would be difficult to seem happy about large beach balls being thrown at you by the audience every now and then, but I had hoped Justin Harris would have more of a sense of humor. There was very little banter in-between songs, which in my opinion is really what makes a concert (and a band) memorable.

What was impressive, however, was the extraordinary musical talent of the Portland trio. There was no "lead singer" per se, because each of them took turns in that role, even the drummer Danny Seim. Justin Harris and Brent Knopf each played a wide range of instruments, from keys to guitar to saxophone. Even members of the choir played guitar or drums at times.

Despite my slight disappointment at the band's performance, I enjoyed the show very much, as did the rest of the crowd. After all, Menomena's songs are catchy and danceable. I got my CD signed by Harris, and a kid next to me got an enormous set list used by the choir.

Then we began our 45 minute wait for Aqueduct…