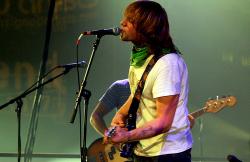 This was the first show I’ve seen from local band the Pharmacy and going in, I wasn’t sure what to expect. My favorite description of the band was from this site, where they were called “a drunk, less intellectual They Might Be Giants,” which both explains everything and nothing at all. Actually, they reminded me of the Epoxies, as they were a bouncy, pogo-y punk band with great hooks and catchy songs.

When a band decides to cover a Beatles song it requires two things: talent and chutzpah. Fortunately, the Pharmacy has both. As igLiz noted at the Capitol Hill Block Party a month ago, they covered “Don’t Let Me Down” and this evening they opened their set with “Eleanor Rigby.” It was messy and disjointed but it sounded great within the confines of the Sky Church.

A few things struck me about this performance (and band): like Jerry Lee Lewis, they were not above damaging their equipment for the sake of the show. After they played their final note they began tossing around equipment like drums and they keyboards as though they didn’t cost hundreds, if not thousands of dollars. But they did get everyone in the Sky Church (or as many people as mathematically possible in Seattle – and it was pretty packed in there) dancing and it surely felt cathartic after an intense 45-minute set of solid punk. I also noticed that some songs filled out every inch available to them and even sounded epic at times as though they were Queen. They also changed time signatures with a greater frequency than John McCain changes his mind. I could easily picture the Pharmacy opening for Green Day at Key Arena on a Tuesday night and playing the Comet on Friday of the same week.

The funniest part of the set was when the crowd was asked if they had seen some “mom dancing,” complete with an illustration that mimicked a someone with their eyes closed swaying their hands slowly. Even though they said it was everywhere, no one was mom dancing to the Pharmacy. If they were, they would not have been for long before bumping into some kids jumping up and down.

The Pharmacy: the one place at Bumbershoot safe from mom dancing. How’s that for an endorsement?