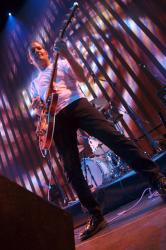 True story: as I was walking through the Bumbershoot crowd after this show, I overheard a radio station's promo being blasted at one of the Seattle Center's carnival games that advertised itself as the station that "loves the Eagles as much as you do." I found that fitting and apropos because I had just seen the Fucking Eagles rock the Sky Church and that band took its name from the famous line from The Big Lebowski where "The Dude" shouts, "I hate the fucking Eagles!"

The Fucking Eagles, though, are not "that type" of band ("that type" being a jokey band that has seen the classic stoner film a few too many times). They are a throwback from a time when rock and roll predated the Beatles and the Rolling Stones. They clearly love Carl Perkins, Jerry Lee Lewis, Little Richard, and Big Mama Thornton. With their rockabilly, rhythm and blues, and good old-fashioned rock and roll sound, they would not be out of place on stage in a honky-tonk bar dodging beer bottles 50 years ago. It doesn't hurt too much that their lead singer mimes the James Dean look pretty damn effectively (sideburns, white t-shirt, et al).

The band, a four-piece ensemble from Tacoma, took the stage with the traditional setup of two guitars, bass and drums and played to a nearly packed Sky Church for about 35 minutes. The band wasted little time with chitchat between songs (although they did wonder aloud in amazement that their LP, A Million Dollars Worth of Music, was available in stores despite their "unspeakable" name). Instead, they went through most, if not all, of the album as well as covers of R&B legends' Etta James and Irma Thomas' songs ("Loving You More Everyday" and "Breakaway," respectively).

The set was enormously entertaining, and certainly one of my highlights of Bumbershoot. It didn't hurt any that they played in the exact same location that I've seen both Chuck Berry and Little Richard play. One reveler summed it up best by exclaiming to his significant other on the way to the exit that he was "a new fucking fan of the Fucking Eagles."

More photos of the Fucking Eagles: