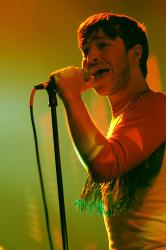 I arrived for Day 2 of Bumbershoot 2007 eager to catch my first scheduled act of the day: Seattle's own Natalie Portman's Shaved Head, a five-piece band I sadly missed (but ChrisB caught) at Capitol Hill Block Party. The band were also the winners first runners-up at this year's illustrious EMP's Sound Off, an all-ages battle of the bands competition that has spawned some of Seattle's best bands over the years (Schoolyard Heroes, the Lonely H, Idiot Pilot, and the late-great Mon Frere, to name just a few). They've been on my must-see radar awhile, so I made sure I got to Bumbershoot on time for their noontime performance. And oh my. What a performance it was!

I can't believe it took me so long to go see them play.

Natalie Portman's Shaved Head epitomizes everything that is youthful, exciting, and fun about music. Their effervescent electro-pop songs positively electrified the full house at the Sky Church with a buoyant energy that made them a pure joy to watch (and listen to).

They reminded me equal parts of United State of Electronica meets early B-52s (co-vocalist Claire England certainly contributed to this thought) meets the Osmond family (okay, my pal Martin suggested that last one, but I think the comparison is apt, in a weird way). And most of the dancing jubilant fans dancing along were younger than the band members — I'd have placed the average age as too young to drive. This gives me hope for the future. Natalie Portman's Shaved Head is what kids and teenagers *should* be listening to, versus the Hannah Montana Disney-pumped crap and the tarted up Fergie supa-crap Bumbershoot was serving up later that night (aside: NPSH professed their love for Fergie, so my apologies to them for slamming her in their review. Though they also said they used to live across the street from her and stare in her window, which I'm pretty sure isn't true… so who knows?)

But don't think the musical ability of the band members suffer for their youth, replacing actual musical ability with enthusiasm. No way. They had the musical chops to substantiate every bit of their mirth. Their songs were well-crafted, the band had great live instrumentation (keys, guitar, and drums) that augmented the electronic beats, and all their vocal harmonies were spot on, making their repertoire of (all original, I think) songs really robust — I'd even say, mature beyond their years. That is, mature in a giddy, shake-yer-ass-onstage and bop along sort of way… which is, um, my favorite sort of maturity.

And did I mention the outfits? The band sported fantastic matching duds: white jeans, white baseball sleeved shirts with different color arms on each performer, and (the best part) contrasting colored FRINGE under the sleeves.

All in all, Natalie Portman's Shaved Head was one of my favorite Bumbershoot 2007 moments, and definitely was my favorite pleasant surprise.