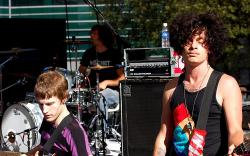 I am loath to begin my very first live show review with such a terrible confession, but here it goes: before today, I had never heard the Lashes. I had of course heard their name dropped by plenty of local scenesters, and have been told more than once that their sound is right up my alley. They all told me I would love the Lashes, and they do know me well.

The Lashes delivered pure power-pop excellence to a huge audience packed with teenagers. The crowd's energy was palpable as the band made their way through one incredibly catchy song after another. But what really won me over was the remarkable stage presence they have. Their frequent banter and hilarious pranks made their show one of the most entertaining I've ever seen.

The most notable moment in the show came right after the band played the new song "Eric's Song," when lead singer Ben Clark suddenly rushed off stage, yelling at his band mates to play some filler. He returned moments later with a cell phone in his hand and shushed the entire audience (an opportunity some used to shout their praises when they could actually be heard). Holding the phone up to the microphone, Clark called King 5 news and shouted to the poor receptionist, "Look out your window, it's a breaking news story, the Lashes are here!" No one bothered to tell him until much later that the news building facing the stage was actually KOMO 4.

Of course, the real story here was the return of guitarist Eric Howk, who suffered a terrible fall in May and was consequently paralyzed from the waist down. He came on stage to the massive applause of an audience who were truly thrilled to see him there, and then proceeded to play some kickass guitar.

This band definitely has me hooked, and I am so grateful to ChrisB for letting me cover them. Even in the ungodly heat (or was that just me?) and the pounding headache from the copious amounts of smoke (tobacco and otherwise), I could not help but dance along to such masterful powerpop. The show ended with a shower of silly string, streamers, and other treats, poured onto the crowd by Ben Clark.

Honestly, after such an incredible show, I don't know why I didn't see that coming.

More photos of the Lashes by Eduardo Brambila: