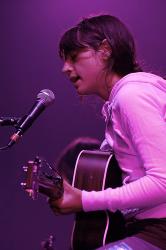 When I first saw the Bumbershoot 2007 schedule, one of the artists I was most excited to see was Tiny Vipers, the moniker for Seattle artist Jesy Fortino, a band that has taken Seattle by storm of late, getting signed to Sub Pop records and releasing a devastating debut record, Hands Across the Void. I'd read imaginary writer elle's glowing review of the album, and have heard even more positive comments about her commanding yet subtle live performance. Kinda like an early-Cat Power, only sans the super-stage-fright nutter-ness.

With Tiny Vipers playing the Sky Church, followed by one of my favorite bands of the moment (and fellow new Sub Pop-signees) Grand Archives, I was seriously blissed out by the prospect of my end-of-Saturday show schedule.

Unfortunately, I over-estimated my Bumbershoot staying-power, and after an eight-hour plus day in the sun, the appeal of a real meal that didn't involve a long line was too appealing to pass up. That's what I get for attempting an epic Bumberday while 5.5 months pregnant. I missed the show… but at least awesome imaginary photographer Eduardo Brambila was there to snap these amazing photos!

And now I count on you, imaginary readers: Tell me what I missed! I want to hear all about it…