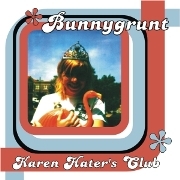 It's been seven years since St. Louis indiepop sensations Bunnygrunt released their 1998 classic Jen-Fi {No Life}. Because of the band's sunny lyrics, la-la harmonies, classic pop hooks, and boy-girl dynamics, they've often been labeled "cuddlecore," but Bunnygrunt has always flourished a bit more bite to them than fellow cuddlers like Of Montreal and cub.

On their long-awaited new CD Karen Hater's Club, Bunnygrunt have evolved even further from their twee-ish beginnings: there's more guitar distortion this time around, experiments with screaming and genuine guitar shredding, some horn accents, and a little more angst. Now a duo, Matt Harnish {vocals and guitar} and Karen Ried {vocals and bass} have called upon a rotating cast of St. Louis-area guest musicians to help record Karen Hater's Club. That said, the album's sound is quite cohesive, even with the 10+ additional contributors.

The album is book-ended by some pretty weird, potentially off-putting stuff: opener "Bunnygrunt @ Budokan" is a brief, noisy squall of simultaneous guitar-bass-drum madness that explodes into hysterical cheering. Album closer "We Got Your Money" concludes with super-loud screaming and shrieking that are easily the loudest — and not always pleasant — sounds on the record.

Crack that tough shell, though, and you'll be more than rewarded with the gloriously chewy, sticky pop center. Short and sweet, the songs tumble from one to the other with exuberance like a terrific story you're so excited about telling that your sentences tumble over themselves. "Horror Hotline: Big Head Baby" boasts a classic bubblegum chorus {with trombone and saxophone!} that's so insanely catchy that even the pop-haters in your life {speaking of whom, what is their problem anyway?} won't be able to stop singing it. The Matt/Karen vocal interplay on the fun, rockabilly-ish "Hometown Rockstar" recalls John Doe & Exene Cervenka of X. The clean-sounding "More Loves Than Stupids," with the classic line "Even Richard Butler knew the truth," revels in Bunnygrunt's earlier, simpler style-a gentle reminder of how far they've come.

Fans of Bunnygrunt will love having excellent new songs to memorize, and first-time fans can look forward to a perfect pop summer soundtrack. Let's hope we don't have to wait another seven years for their next record!

Remember, TIG presents Bunnygrunt, Tullycraft, and Blue Checkered Record Player this Saturday, July 9, 2005 at the Sunset Tavern, 4p, and only $4 — and it's all-ages!