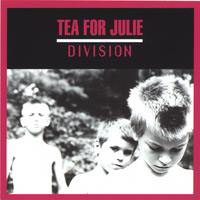 By July, I usually have a good idea of which albums will top my Best Of the Year list. Bloc Party’s Silent Alarm is definitely one contender, as is British Sea Power’s Open Season. And Division by northwesterners Tea For Julie just may be on that list as well.

It’s hard to fathom that Tea For Julie are a relatively new band, Division being their first full length album — self-released, no less. The depth of talent showcased on Division is truly spectacular; the songs are highly refined, intricate, and polished with a heavy dollop of panache. It is a brazen, if welcomed, move to incorporate such big sounds on a debut. Tea For Julie is a confident force, as evidenced on heavy numbers like "Earshot" — which delves into prog-rock territory, all bravado, soaring vocals and ride cymbals — and album closer "BT6."

The chops on opening track "Hello" (a pretty good name for an album-opening song) are just startling — ponder for a minute the 20-second, precise-as-a-military-march drum feature and the hot guitar arpeggios. And then the song suddenly morphs into a beautiful, floating sonic ending that strangely doesn’t sound at all out of place following the arsenal of an intro. If you’re looking to wow a new audience with your talent, this is the way to do it: tackle their eardrums. This is the kind of track that would fill a vast venue like the Gorge, the music wafting over the canyon; it’s the kind of track that would split eardrums and brains at a small rock club — which is where Tea For Julie can often be found (for now). It’s no wonder that Tea For Julie was selected to share the stage with serious powerhouses like Evan Dando and The Ocean Blue.

Tea For Julie, based in Portland, OR, are a four-piece (Denver Warner — bass, Jad Simpson — drums, Travis Stanek — guitar, and Michael Deresh — "the other noises") who draw heavily on across-the-pond sounds. The brooding overtones and swooning melodies bring to mind high moments of recent British invaders like Muse or Kasabian or older staples like the Stone Roses and Happy Mondays. Occasionally singer Deresh warbles like Bright Eyes’ Conor Oberst, and yet other times evokes the banshee wail of Perry Farrell.

Harmonica-soaked janglers like "Don’t Whisper" take the record down a bit, the dusty cowboy beat ambling along in comparison with the higher-RPM frenzy of post-punk gems "Still Life" and "Julep."

The band has garnered quite a bit of attention on KEXP of late, and for good reason. Division is a stunning first effort, sure to be at the top of many local-release ‘best of 2005’ lists and perhaps atop a few national lists as well.