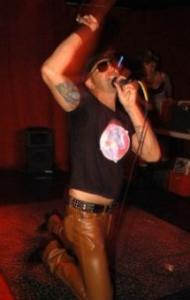 We all know that nothing says 'Happy Holidays' like Bon Jovi and Big Country. So, we've rolled them all together and on Thursday, December 2nd, Three Imaginary Girls will present the Buttrock vs. New Wave Rockstar Karaoke Holiday Bash at Chop Suey!

The night will feature rockstar performances by local musicians and celebrities singing their favorite Buttrock or New Wave song. Rockstar performers include members of…

Of course — in imaginary style — you won't need mistletoe to get lucky. The event will feature dangerous drink specials, John Roderick of the Long Winters as Santa Claus, and a raffle {with prizes from Sonic Boom Records, Vain, Nice Promotions, YUM YUM Records, Jade Tree Records and more!}.

Steve the Karaoke King (of Twilight Exit, Molly McGuires, and the Comet Tavern fame) will serve as KJ for the big event, which means the song selection and the sound system will both be incredible. Need further incentive? Imaginary Karaoke parties always tend to attract surprise guests, including Vendetta Red's Zach Davidson, the Posies' Jon Auer, and the Vells' Tristian Marcum. Merry Christmas to you, indie-music fan!

Want to find out or relive what happened last year? Check out our Buttrock Karaoke party recap!

And make sure to join us at the PRE-BASH PARTY at Vain to celebrate the opening night of ‘LIVELOUD’, the work of imaginary photographer extraordinaire, Ryan Schierling. The TIG-party pre-funk runs from 6p-9p and Three Imaginary Girls will be spinning tunes to accompany complimentary beverages. More info…