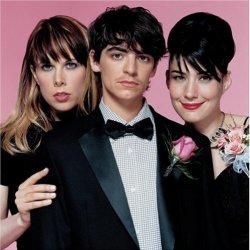 This Island is the first LP from Le Tigre in what seems like an eternity (2001's Feminist Sweepstakes was the most recent). It's the first record they've released on a major label (their previous home, Mr. Lady Records, folded earlier this year) and it's their most accessible. It's also, unfortunately, their worst release to date (excluding 2002's EP of remixes).

Fortunately, Le Tigre is such a great band that there's still much to admire on This Island. Kathleen Hanna is still a rock and roll goddess in every sense of the word. But this isn't the release one should use to introduce the legendary Le Tigre to blue people in red states.

Le Tigre has always managed to create music that is both subversive and overt. Any band can write a song about wanting to see a popular politician killed. But to make such a song and make people dance to it — that's fucking amazing! {"Bang! Bang! Daddy I want you dead / Bring me Giuliani's head," from "Bang! Bang!" off the From the Desk of Mr. Lady EP}. Le Tigre make accessible pop music without compromising their message one bit.

While This Island is a political album, it differs from previous entries in the Le Tigre oeuvre because the most outspoken songs are also the weakest. "New Kicks" and "Seconds," two songs driven mostly by their (admirable) hatred of George W. Bush, are also the most grating. To their discredit, they don't mention Bush by name; nor do they implicate Cheney, Rumsfeld, Rice, Rove, Wolfowitz, Ashcroft and the other assorted suspects. The only proper name mentioned is the 70 year-plus Henry Kissinger {and that idea seems even more questionable in a pre-election world where Chris Hitchens is arguing for W's reelection in the pages of The Nation}.

"New Kicks" uses audio clips from an anti-war rally and sets them to music. Numerous anti-war clichés are heard, but the ladies of Le Tigre, unfortunatly, are not. When rock historians judge this record, "New Kicks" will be remembered as Le Tigre's "Revolution #9." For some reason, this song not only made it onto This Island, it's the first single! The track "Seconds" is an incoherent mess altogether. It sounds like a Bikini Kill b-side, reminiscent of the inaudible screaming we hoped Hanna forgot when she broke up BK.

Despite these wrongs, there's actually quite a bit to admire from this record. The Ric Ocasek-produced "Tell You Now" is a great pop song with catchy harmonies. It may be the best song on the entire record and would have been my choice (and many other critics) for the lead single. My favorite, however, is "Nanny Nanny Boo Boo." But that does not mean its perfect. The song name-checks Cynthia Plaster Caster, which is fine — except that Northern State beat them to the punch and dropped her name in a rhyme over a year ago.

In the three years since Le Tigre's last LP, they have inspired many artists to try to recreate their sound. The influence of Le Tigre is especially evident here in the northwest; it is nearly impossible not to see the lineage from Le Tigre to the Fitness or Anna Oxygen. The point is not that they are Le Tigre's followers, but that they are their peers. Call me crazy, but I suspect that was the goal all along.