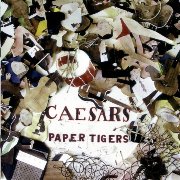 Sweden's Caesars are all grown up now.

Judging from their fourth and newest release Paper Tigers, they've taken their existing garage rock sound and added more layered harmonies, instrumentation, and lyrical upswings to give it a refreshed, mature feeling. You probably know their song "Jerk It Out" which was featured in an iPod commercial (as well as their 2003 release 39 Minutes of Bliss), and you'll find it again on this CD. Sure, it's a marketing ploy — but it's honestly just the carrot on the end of the stick. If you're like me, once you hear the album you'll realize that yeah, that's a damn good song. But surrounding it are twelve more songs that are polished, confident, and FUN.

Every track on the release offers up a party for your ears, combining elements of garage rock and 60s-reminiscent British pop. The opening track "Spirit" is ambitious and assured, with scratchy guitar and a building, pulsating tempo. The title track slightly slows down the pace, with a chorus that is a non-stop lyrical flow that's inspiring and — dare I say it? — heartwarming. From the 60s-inspired "It's Not the Fall That Hurts" to the now ubiquitous "Jerk It Out", I constantly found myself turning down my speakers, paranoid about my neighbors complaining, after so many repeated listens. But it's "Winter Song" that really got me on this album. Filled with gorgeous string arrangements and textured harmonies, it's a hauntingly beautiful song that, positioned next to a song that sounds completely different like "Jerk It Out", makes you realize the variety of musical approaches that Caesars are capable of.

I was admittedly skeptical of them putting "Jerk It Out" on this album after already having it on their last one, as it seemed just too commercially convenient. They claim its "remixed" on this album, but don't expect to hear a drastically different version of it. It sounded exactly the same to me, maybe with a couple extra electronic infusions on it — hard to say. Nonetheless, giving that song another listen after not hearing it for a while, I realized that it's really a brilliant song. So I forgave them.

Ceasars will be playing at Taste of Seattle with The Golden Republic on July 23 on the KBKS stage, so check them out.