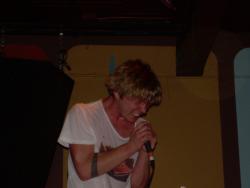 Cage the Elephant and The Gaslight Anthem's pre-Coachella Warm-up

Seattle is, according to Google Maps, 1,262 miles from Indio, California. Because it is one trip up or down I-5, a lot of touring acts hit our city a week or so before playing the Coachella Festival. Franz Ferdinand, Leonard Cohen, My Bloody Valentine, Glass Candy, Paul Weller, White Lies, The Ting Tings, Gui Boratto, Junior Boys, Thievery Corporation, The Presets, Glasvegas, Friendly Fires, X, Sebastien Tellier and Dr. Dog are some of the artists that will take a 206 stage in a week prior to or after Coachella (give or take a few days).

The folks from 107.7 KNDD brought two more buzz-worthy Coachella-bound bands for a show at the High Dive last Saturday night: Cage the Elephant and The Gaslight Anthem. One band I thoroughly enjoyed and the other I was indifferent to.

Under the best of circumstances, it’s difficult getting from the bar to the restrooms to finding a place to actually see the band on stage at the High Dive. It was even more so frustrating with the packed crowd, all of whom won admission through a radio station’s contests.

The Gaslight Anthem was the headlining band and I really thought I’d enjoy their set more than I actually did. I hadn’t spent any time with their 2008 album The ’59 Sound, although eMusic.com said it was their favorite album of the year and got some additional validation from my favorite (non-TIG) music website, Idolator, who put that album on their best of 2008 list. Admittedly, I hadn’t spent too much time with it, but watching the band live, I thought it would be what would happen if Bryan Adams ever orchestrated a bloodless coup and became the lead singer of The E Street Band. I know Springsteen comparisons are inevitable (and probably lazy) because they both have their mail delivered to New Jersey zip codes, but it’s pretty obvious who the band’s biggest inspiration is, with their bar-band guitar parts and “meaningful core” lyrics.

Cage the Elephant was pretty great, though. They call Bowling Green, Kentucky home but sound like they came from Detroit. This was their first Seattle show. Their singer, Matt Shultz, looks kind of like Kurt Cobain. He had messy blonde hair, wore an old, white t-shirt and appeared like he was mostly asleep between songs. His stage presence was quite manic, bouncing across the stage and jumping into the crowd during songs to looking like he had just woken up.

The band is messy when they want to be (most of set, save for when they played their single “Ain’t No Rest for the Wicked” towards the end of the set) but have a blues-influenced punk sound, reminding me of the first couple of White Stripes albums. During the first song he ran onto a small table that was adjacent to the stage, knocking over several empty drink cups along the way (although fortunately not mine, which wasn’t empty at the time). It happened so quickly I couldn’t get a photo, although it was the best chance I had in the packed High Dive.

They played songs from their 2008 debut album but the best moments of the set were when they played “James Brown” (a Stooges-like rocker) and the Neil Young-ish “Ain’t No Rest for the Wicked” back-to-back because those were the songs the crowd knew the best and gave the band more energy to feed from. When they finished after about 35 minutes (just before 10pm), the crowd was chanting for an encore, but they never got one. When the band left the stage, the band members seemed bothered with Matt Shultz for whatever reason (they were likely more sober than he was) and had to talk him into leaving the stage after he was just repeating “thank you very much” over and over again. I hope I’m mistaken because Cage the Elephant is a band with a lot of potential and they already have a lot of people buzzing about their live shows (especially post SXSW). They could become a really great band in the long term and I hope not just a band that burns out too quickly. Eventually, even I stopped talking about Be Your Own Pet.