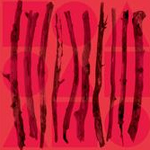 Better known as drummer/ percussionist/ keyboardist for Aloha, Cex, Joan of Arc, and most recently as a touring member with DC's Georgie James (who you may have seen at a stellar Bowery Ballroom performance, opening for Camera Obscura), Cale Parks offers on his first proper solo release a sonic creation unlike anything he's ever done.

Recorded on borrowed laptops in myriad cities and between takes of the most recent Aloha record, Illuminated Manuscript plays as a cathartic creative release from Parks' day-to-day avant-garde endeavors. The instrumental tracks range from wistful ambience conjuring Brian Eno ("Pretty Boring," "I am the Arm") to sonic explorations of cryptic lyrical enigmas ("Galaxy 8180," "Wet Paint"). Much of the record was conceived during a two month stretch when Parks lived with Tony Cavallario (Aloha's singer/guitarist) and his wife in Rochester, NY.

"Tony's married, and his wife's a doctor," Parks says. "So when she would get home from work it would be husband-wife time, and I'd go upstairs to the attic where the instruments and computer were." After building a Myspace page for the solo songs, Parks began the arduous task of asking all Aloha's Myspace "friends" to be his "friends" as well. One of them ended up being a record label in Japan who, over Myspace messenger, offered to put out the record in Japan. Polyvinyl, home to both Aloha and Joan of Arc, released the disc domestically in September, with a different track-listing and two bonus tracks that were recorded so close to deadline they didn't make the track listing on the artwork.

But when it's all said and done, and the record is evaluated without context or back story, Illuminated Manuscript succeeds as a record that defies musical conventions and expectations, simply by augmenting them into greater, more eloquent forms. Given Parks' day-to-day gigs, however, defying expectation has to be expected.