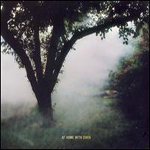 At Home With Owen

Chicago's Mike Kinsella (Cap'n Jazz, Joan of Arc, American Football, Owls) drops his fourth full-length record under the moniker Owen this fall. And just like the previous three, it's a gorgeous sea of tranquil guitar ambience and melancholic yet hopeful narratives.

There's a trend that's developed over the years with Owen records: the first, self-titled, was a fairly barebones affair, expanding on the harmonic beauty of the only American Football record (one of the most unsung gems of the last ten years) by trading in the web of telecasters for acoustic guitar and bedroom confessions. As time has passed, Kinsella has purchased more and more equipment (the bulk of his recording catalogue was born in his childhood bedroom, in the house in which his mother still lives) and thus has been able to make more and more sounds. His soundscapes have expanded in depth, and we're all the luckier for it.

At Home with Owen finds Owen entering the studio (after doing some cutting at his mom's house, of course) and slaving for a year over these eight songs (the typical number for an Owen LP).

The record begins with "Bad News," which may as well translate to a six-and-a-half minute flipping of the finger: "I know it hurts to hear but it's true," Kinsella sings. "You don't mean anything to anyone but me / and even I know you're blinded by conceit / Now you know." It's hard to imagine any voice pulling off such lyrics as well as Kinsella's quiet, near-spoken articulations of melody.

"The Sad Waltzes of Pietro Crespi" offers the first tangible taste of Kinsella's exceptional guitar work as he paints a picture of the melancholy found in one's typical frustration with romantic relationships. Meanwhile, "A Bird in Hand" details the anger that's found in that same frustration:

Like each Owen record previous, the eight songs on At Home with Owen find a quick way into the brain's pleasure centers and fuck the hell out of it. Unfortunately, each rule has an exception, and that exception comes to life in the form of a cover of the Velvet Underground's Nico-sung "Femme Fatale." (Why Kinsella didn't just play his own song, rather than cover a song many people would argue can not be covered well, we'll never know). But the good greatly outshines the bad. "Windows and Doorways" identifies with everyone who's ever had a friend who died (or may as well have died), while album closer "One of These Days" simply details the idea of wanting something in such elegant piano and guitar that you just end up wanting to hear the record again.