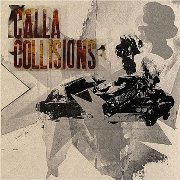 Calla's latest release, Collision is a departure from the melancholy, ethereal rock of their previous releases. While the sadness in the form of slow, dispiriting, hook-laden melodies is still there, Calla has found a new space with these songs. The timid acoustic guitars juxtaposed with sparse electric riffs have given way to somewhat heavier electric guitars that have hints of a psychedelic feel; they drudge along a bit more — as if Bedhead, Kepler or Pedro the Lion were to take a crack at re-writing the second side of Black Flag's My War.

The recording starts off strong with "It Dawned On Me," Initiate," and the pulsating "This Better Go As Planned." The songs are thoughtfully orchestrated and catchy, and the pithy lyrics penetrate and get caught inside your head with repeating lines such as, "Send your love as an inside joke." The fifth track, "Pulverize," is a lonely journey down a dark desert highway where occasional dots light remind you of your isolation. The final two tracks hint towards more space rock influences and are bit reminiscent of Ride.

All in all, though Collision doesn't have the same presence as Televised, it's still dark and engaging and could prove to be a vital stepping stone in the bands evolution, moving further towards a sound uniquely their own.