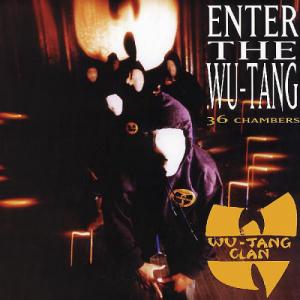 "Can It Be All So Simple" by the Wu-Tang Clan

Being a kid from central Massachusetts, I might be the last person in the universe to have any useful insight on the Wu-Tang Clan. I have to admit that for me, hip-hop was an acquired taste that has taken years for me to figure out what’s good, what’s bad and what’s just terrible. However, once I cracked this code, it has been a revelation … case in point, Wu-Tang’s Enter the Wu-Tang (36 Chambers). This album is a landmark, I knew that, but I just couldn’t figure out why. In college, I remember the radio station getting a copy of the CMJ 4-disc anniversary set. One of the tracks on it was “C.R.E.A.M.” and it baffled me – the song, not its inclusion on the set. It seemed clunky and alien to me. Ah, but I was young and foolish. It took gateway drugs like Busta Rhymes, The Roots ‘ “You Got Me” and A Tribe Called Quest’s “Scenario” to get me started and really, it was Jay-Z’s “Big Pimpin'” put it over the top. From there on it, hip-hop wasn’t something I felt like I needed to appreciate but rather something I genuinely liked, something I actually wanted to hear.

So, it still really doesn’t give me any good excuse to why I didn’t get a copy of Enter the Wu-Tang (36 Chambers) until about a month ago. Yes, I am merely a decade and more behind the times, but since I finally got my greasy paws on this album, it has shoved many new releases aside. Even “Can It Be All So Simple,” one of the lesser feats on the disc, has a certain genius to it – combining the RZA’s soul sample and the Wu’s usual lyric gymnastics (and I’m still confused how the Wu-Tang Clan, who is touring and has a new disc coming out, can muster on without Ol’ Dirty Bastard – the man was a master). It’s captivating music and not just in a musty art museum-type appreciation, but in a genuine affinity towards the genre (now if only we could convince Betsy Boston that hip-hop is the bees’ knees).