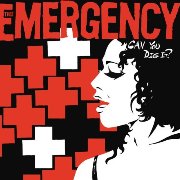 Can You Dig It?

Thee Emergency's Dita Vox is pure rock and roll hotness. She's all woman, no argument from me, but her vocals evoke brains, intensity, strength, and tenderness beyond gender. You want to BE her, whether or not you're a young girl who also wants to front a gasoline-drenched, Bic lighter-waving four piece slutter-rock band, or an old bearded white schlub like me that tosses back the rum and finds their identity lost in the rancorous rock and soul.

Boldly, maybe brutally produced, by blues-punk legend Jim Diamond at his Detroit studio Ghetto Recorders, Thee Emergency's now-caustic (the Pearl Harbour fronts the Rezillos of single "Get It Up"), now-chillingly soulful (the shattered but empowered "No Condemnation") 10 track (plus a sweet Gospel epilogue, "Angeline") debut simply burns. Forgiveness and fist-fights abound, screwed up relationships and skin on skin salvations, drinks poured on emotional wounds that might never heal right. Diamond captures it all as he did for the White Stripes, and by the slinky strut of "Sugar" you gotta wonder if Mick Jagger hadn't had his soul plucked from his scrawny frame around the time of Sticky Fingers and placed in Vox's body. But you stop wondering, because Jagger would have sold his soul to have an inch of her real talent.

Sonic Smith shows no fear taking on a spattering lead guitar midway through or near a number, Tom T. Drummer rivets the kit like a serial killer rendering flesh with a fresh screwdriver, and bass player Nick Detroit must have grown up doing the funk for sweaty inner city Baptist church bands. And then there's Diamond again, his organ spurts, tambourine jangle, and occasion sax squeals making Vox's backing almost as irresistible as her own performances. And that's some mighty competition.