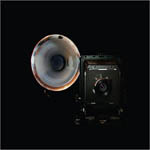 Paparazzi Lightning is the second full-length release from Austin duo Ghostland Observatory. It's tough to believe just two dudes create this monstrosity of sound. They pack a smacking aural punch of whip-snap dance music in the post-punk vein (i.e., it's angsty, but no less danceable).

The comparisons to The Rapture seem obvious: Vocalist/guitarist Aaron Behrens shrilly catcalls his way thorough most of the album's 10 tracks, while keys/drummer/producer Thomas Turner provides tempo-splitting beats with serious groove.

The infectious "Sad Sad City" has been receiving lots of attention on KEXP for the past several weeks, with "Piano Man" (sorry, not the Billy Joel hit) close on its heels. Both tracks are highlights of the already strong record. The tandem takes pause for the second half of the album, including "Stranger Lover," reminiscent of "Digital Love" by Daft Punk.

Ghostland Observatory's bio may say it best: "Ghostland Observatory is not a band, but an agreement between two friends to create something that not only heals their beat-driven hearts, but pleases their rock 'n roll souls." Paparazzi Lightning is one of those albums that crosses genres in the way hipsters love— enough rock to appeal to their string-loving hearts, but enough beats to move those feet.

It may even make Seattle's notoriously stoic listeners dance.