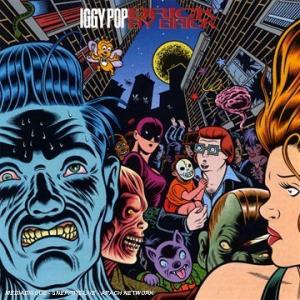 I definitely feel much worse today, after sleeping 14 hours, than I did during my recent string of being awake for 44 hours. I think this would count as my “not sleeping” hangover. Bah!

Today, though, I was greeted by a song I loved in my youth. Heck, I remember buying it on cassingle in the dark and somewhat creepy record store that was in the downtown of my hometown in Massachusetts (the immortal Stop N’ Cop, whatever that meant, and by immortal I mean it closed like 2 years later). Anyway, this was during my “crush on Kate Pierson” phase, and the mix of Iggy Pop and Kate was too much to resist – especially considering their cameos on the Adventures of Pete & Pete (along with Michael Stipe and Juliana Hatfield). The song is rather tame and by the numbers, but to have two legends of punk/post punk modern rock duetting is something that just doesn’t come along too often. (The song was even a relatively large hit for Iggy, topping out in the top 40 if I remember correctly).