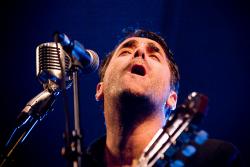 There was nothing romantic about the Main Stage at this year’s Capitol Hill Block Party. How could there be? Unless you fantasize about beer gardens, massive throngs of people and hot dogs with cream cheese, there’s very little dramatic atmosphere for an outside stage. The Block Party is not for lovers.

That didn’t stop DeVotchKa from wooing the audience Saturday night. In fact, their lush melodies and passionate crooning brought to mind gypsy tents instead of beer tents, and made perfect strangers turn to each other with a romantic glint in their eye.

Don’t believe me? Okay, here’s my evidence. The girl in front of me during “Transliterator” leaned back into me, swayed to Tom Hagerman’s bouncy piano and Shawn King’s swirling rhythms, and tilted her head up to my ear to sing along with frontman Nick Urata. She was so taken with DeVotchKa’s vibe that she had to share it with someone. And she was _way_ out of my league.

No, I’m not making this up.

Special note goes to Urata’s theriman playing throughout the set. One wouldn’t think such a space-age instrument would blend with the band’s old world violin and horns, but it fit perfectly. And Urata makes the most dramatic faces while coaxing sounds out of the thing.

DeVotchKa’s set was truly a beautiful way to end the Block Party. They played an even mix of their back catalog, including crowd favorites “How It Ends” and the instrumental “Death By Blonde.” Even the drunk guy who climbed atop the stage to dance — finally dispatched by an surly-looking security guard — couldn’t break up the passion of their performance. While the Block Party may not be for lovers, DeVotchKa certainly is.