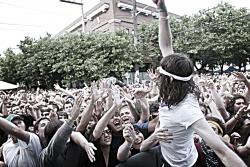 The set from Gregg Gillis, aka Girl Talk, was less of a show than an event.

After a brief introduction where Gillis said he felt like the Block Party graduated him to the main stage because he packed the crowd into Neumo's, he was mobbed by a large crowd of dancers on stage.

While working from two laptops on stage (although I only saw him use one – but that could be because he was usually blocked by the crowd onstage), he delivered a 45 minute set of mashups, mining popular culture for the last 20 years or so. He made his latest album, Feed the Animals available as a pay-as-you-will download last month but as his prominence as a DJ and performer increases, so will the likelihood of a lawsuit. Clearing the 300+ samples on Animals is a logistical nightmare and probably an impossibility.

Yet for all that, it is a surprisingly coherent work. Somehow he gets from Quad City DJs to Kelly Clarkson through ? and the Mysterians and Nine Inch Nails. By combining elements of countless pop songs, borrowing beats, hooks, lyrics and harmonies or whatever, Gillis finds that there are lots of similarities in the pop music we love.

What makes listening to Feed the Animals and his previous album Night Ripper so interesting is identifying and recognizing the samples. Hell, he borrowed "A Milli" from Lil Wayne and it was the second time today I heard it sampled (Common Market also opened their set with the hook on repeat for most of the first song).

Live, Girl Talk is not a lesson in DJing, like the clinic that DJ Shadow regularly puts on. Gregg Gillis is concerned with getting the crowd to move to the songs we secretly love (or loved). This set wasn't mind-blowingly good but that is largely irrelevant. Feed the Animals is a unique and brilliant record, crafting that record (he reportedly listened to 9000+ songs for research), that was the hard part. Well, that and getting Seattle to dance. That's no small feat but he made it look easy.