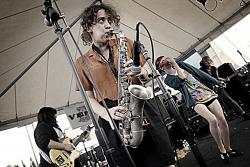 Mika Miko are a five-piece, all girl, neo-riot grrrl band from LA who bring to mind bands like Bikini Kill and Bratmobile.

The setup is two singers (one, Jenna Thornhill also plays saxophone), a guitarist, bassist and drummer. They are not the most musically inclined band — but then, that stopped mattering the moment Nevermind the Bullocks was released. Their music is rough-around-the-edges punk. I don't think there are more than two songs on each of their two albums that exceed two minutes in length.

For about 22 minutes, they rocked the crowd at the Vera Stage, which progressively got bigger as the set went on. The audience in front was especially rowdy, but everyone there seemed to be enjoying it. No one, from my view point, seemed to be uncomfortable or were pushed around.

My favorite moment of the set was when they played the song "Business Cats" because it was driven by a throbbing bassline. They were abrasive and noisy and punk as fuck (just as I envisioned Bikini Kill shows were like back in the day) but the band fed off the energy of the crowd and I think everyone felt sufficently rocked.

At the end of the set one Mika Miko member said, "I saw your faces during that last song and anyone who was scowling, well, I don't even want to talk to you."