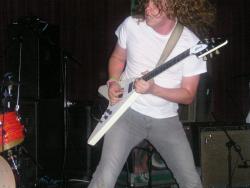 There have always been bands I haven’t given the time of day simply because of their monikers. Case in point: Jay Reatard.

I was unsurprised to be greeted with wild-haired, ironic flying-v toting post-punk rockers. But like mama always says, don’t judge a book by its Pitchfork cover story.

Though skeptical, I was pleased once I witnessed a band who could churn out songs so quick and so raw they were seconds away from tearing my face off. Unfortunately their high-energy antics brought out the mosher in some of the crowd, most likely those too drunk to realize that punk has been on its deathbed for quite some time.

Fortunately, in their tight jeans and golden slacks, Jay Reatard managed to rise above the punk rock grave, deconstruct the genre, throw in garage rock, slaughter that, and beat it into something compact and forceful. Though they may have felt like a gimmick at times, perhaps running on the dreaded 15-minute course, at least they’ve got great music and marvelous stage presence to show for it.